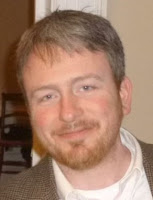 Linda:  Welcome back. It’s such a pleasure to have you. When we last spoke, you were working on the sequel to Solitary Man. Can you tell us a little bit about the story line and have you come up with a title yet?

Eric: Unfortunately, I don’t have a title yet. I’ve never been good at titling my work despite all the imagination I pour into the stories. The title Solitary Man came to me one day when I heard Johnny Cash’s version of Neil Diamond’s song. I thought it fit Doyle, but not necessarily the story. During the publishing process, I wanted to change it, but my editor Daphne convinced me to keep it by pointing out other elements of “solitary men” in the story. I’d like to title the sequel with the same theme so it will probably be something like _____ Man. I just have to find the right adjective!
The story line picks up with Doyle seeking answers to the cryptic statements made by Morris the one-armed man, but his journey becomes more than he bargained for as he comes to faith in Christ through the things Jonathan taught him as well as the guidance of a family of Appalachian hillbillies.

As circumstances make him continue his travels, he discovers a dystopian society that rose to power after the war where the only legal religion is led by a fraudulent, hypocritical televangelist named Gideon Grey. He meets Gabe, a Christian running an illegal church/shelter to help the poor and give them the Gospel and he also runs into a resistance, led by the charismatic Damien, that battles against the government. This leaves Doyle with the choice of what kind of man he wants to be as grapples with the mission and purpose of his newfound faith versus his desire to help overthrow an oppressive government. There’s plenty more going on, and all the questions my readers have will be answered, but anything more might have me dropping spoilers!

LM: How much of yourself do you write into your main characters?

Eric: My wife says she sees me in both Doyle and Jonathan, so I guess I do that at least a little bit. When I’m writing a Christian character, I typically infuse them with my worldview unless the story calls for them to hold some different views I would disagree with (i.e. Jonathan’s pacifism). I think in the future I’ll probably be more conscious of that because I don’t want all my Christian characters to be carbon copies of me. That would get really boring after a while.

LM: What is your main character’s “kryptonite?”

Eric: In Solitary Man, Doyle was a hard man, full of pride and lacking in compassion. His experiences there have softened him to the point where he gladly receives the Gospel, and now in the sequel, he struggles with the changes in heart and attitude that come with being a new believer. He wants to follow Christ and love his neighbor, but he’s tempted to help the resistance fighters battle their government oppressors. As a new believer, figuring out what God would want from him and being willing to obey that regardless of what he’s feeling is one of his greatest struggles.

LM: Solitary Man adds a Christian element to a post-apocalyptic story. How closely did you weave biblical end times prophecies or did you strictly use your imagination?

Eric: I didn’t write it with any eschatology in mind. That was a deliberate choice I made since there are different views on the end times and I wanted to make the book as universally appealing as possible. So all the Christians in the world I created are still looking forward to that day when Christ returns in glory and makes all things new. The very end of the sequel will leave things open for a possible third book, but I haven’t thought that far yet. Since I haven’t yet ruled out anything as a potential plot, it’s possible the end times could play a part in that one.

Eric: I had a series of illustrated, abridged classics that I loved to read growing up. My favorite of the authors was Mark Twain, but I also loved reading Charles Dickens, Rudyard Kipling, Robert Louis
Stevenson, Herman Melville, and others. Thanks to my Prime account, there are tons of classics free for Kindle, so lately I’ve been revisiting many of them through the unabridged versions. I’m currently reading Jonathan Swift’s Gulliver's Travels.

LM: Here are some quickies:
Eric:
Favorite Season: Definitely fall. The temperature outside is perfect, and since I live in New England, the hills come alive with amazing color when the leaves begin to turn. The temperature is nice in the spring as well, but all the budding trees trigger my hay fever, so fall gets the Best Season award in my book.

Favorite Bible verse: I think I’ll have to slightly cheat here since my favorite verse is actually verses. Scripture as a whole is a wonderful, amazingly cohesive collection of wisdom and truth, and I love every word, but the one passage that constantly moves me is the glorious hope revealed in Romans 8, a chapter that begins with this profound statement: There is therefore now no condemnation for those who are in Christ Jesus. And it only gets better the further you read. There are so many incredible truths and promises declared here that we should be weeping with gratitude once we truly meditate on what they mean.

Favorite place to visit: Ever since I was a toddler, my extended family on my dad’s side has been vacationing in Holden Beach, NC every summer. I have so many terrific memories from decades of vacations, that Holden Beach holds a really special place in my heart. Due to work and other things, I don’t get down there as much as I used to, but when I do, the smell of that salty ocean air triggers something in me. I think it’s because it means family to me.

Eric: I’m close to finishing the first draft of Solitary Man’s sequel. Once I do that, I’ll take a short break before I start editing and rewriting to maybe line up some other projects. Doyle’s story is hopeful, but there’s also a grimness to it that makes me want to work on something lighter, so I’m leaning toward an idea I have for a science fiction satire that will show off my sense of humor and love for absurd comedy like Monty Python. We’ll see what happens.

Eric: They can visit my website ericlandfried.com where I have signed copies of Solitary Man for sale. They can also find me on Facebook at Eric Landfried, Author and my Twitter handle is @e_landfried. I’m also on Instagram @ericlandfried, but I’m more active on FB and Twitter. Please connect! I’d love to hear from you!

Former Navy SEAL Doyle has been prowling the broken remnants of a devastated America for years. Alone in an armored bus loaded with weapons and supplies, he's grateful for his solitude. Being alone makes it easier to survive, as others can become a liability in the end of the world. But when a particularly brutal attack leaves Doyle in need of fuel and repair, he has no choice but to venture into the nearest settlement.

Jonathan has been pastoring a small church of Christians in that same settlement, but when he meets Doyle he sees an opportunity to expand his ministry. Cannibals have kept everyone from traveling, but Doyle's armored transport and weapons bring hope to his small band of followers. The two men strike up a mutually beneficial bargain, but neither of them realizes that this journey will change them in ways they could never have imagined.

As they search for other believers, they must battle cannibals, militant atheists, and a mysterious super soldier. Doyle's unbelief and Jonathan's faith will collide in this action-packed wasteland.