As I've mentioned in previous posts, there were no WWII battles fought on American soil, although there were isolated incidents such as incendiary bombs dropped in the Pacific Northwest. However, there was a tremendous amount of mobilization and preparation by both the military and private industry. 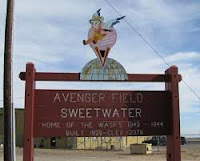 Three hours west of Dallas, Texas is the town of Sweetwater. Started in the late 1870s, the Texas and Pacific Railway arrived in 1881, and the tiny hamlet quickly expanded into a railroad town. The area continued to develop, and in the 1920s the Sweetwater Municipal Airport was built. Using WWI surplus Curtiss airplanes, a small flight school operated until Spring 1942 when it was taken over by the Plosser-Prince Air Academy. Initially known as British Flying Training School No. 7, the Sweetwater Airport was renamed "Avenger Field" as a result of a contest won by a Mrs. Grace Faver.

In the Autumn of 1942, the government requisitioned the airport and closed the

private flight school. Converted to an Army Air Force installation, it trained pilots in preparation for twin-engine flying and subsequent overseas service. Change occurred again when the facility became an all-female training school for the Women Air Service Pilots (WASPs). A new class entered the school every thirty days. A total of eighteen classes completed training. Of the 25,000 women who applied for flight training, 1,830 were accepted, and of those, 1,074 received their wings. Training for women pilots paralleled but did not duplicate that given the men. Gunnery and formation flight training were omitted. Because the women were expected to go into ferrying, emphasis was placed on cross-country flying.

Avenger Field remained a WASP training base until it closed in December 1944. At the end of the war the airfield was determined to be excess by the military and turned over to the local government for civil use. In the mid-1950s the government returned and set up a radar station that operated until 1969. Now home to the WASP Museum, pilots flying over Sweetwater can still land at Avenger Field at the Sweetwater Airport.
Posted by Linda Matchett at 4:00 AM