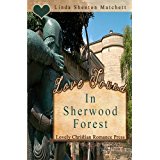 What comes to mind when you hear the town of Nottingham? Do you think of Robin Hood and his merry men? Perhaps the Sheriff? My latest novella, Love Found in Sherwood Forest, came about as the result of a request by one of the mid-sized Christian publishers. A broadcast went out for submissions. Parameters for the stories included word count and the requirement to use word trios in conjunction with a certain location.

Enamored with the legend of Robin Hood ever since I saw the 1938 movie featuring Errol Flynn with my dad on late night television, I selected the triplet that included Nottingham. My story didn't get chosen by that publisher, but was picked up recently by a small publisher in Texas. The publisher subsequently went out of business, but that's a whole other post! 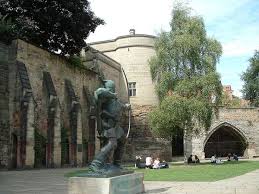 Nottingham is proud of its association with Robin Hood, but did you also know the city has close ties
to the lace making, bicycle, and tobacco industries? I was surprised to discover that Nottingham was considered a borough until granted its city charter in 1897 under Queen Victoria's reign. It does have its very own castle that was constructed in 1068. When Richard the Lionhearted returned from the crusades, the castle was occupied by Prince John's supporters who included the Sheriff of Nottingham.

Located in the lower valley of the River Trent, Nottingham's northern border is Sherwood Forest (yes, THE Sherwood Forest). The weather is fairly temperate averaging mid-40 degrees Fahrenheit during the winter and mid-60s (F) during the summer. The architecture is varied and beautiful. The Lace Market has streets lined with red brick factories and iron railings, and throughout the city there are pubs built from timber. Cultural venues include Albert Hall where the Rolling Stones performed in 1964, and the Royal Concert Hall. Nottingham is home to the oldest football (soccer for you Americans) club in the world, Notts County, founded in 1862.

I was fascinated to discover there are hundreds of man-made caves below the city streets. Nottingham stands on sandstone, which is apparently perfect for cave making. According to http://www.experiencenottinghamshire.com/caves "there are all kinds of imaginative uses for their manmade excavations - from cave dwellings to underground bowling alleys and jail cells." The largest cave in the Creswell Crags is named Robin Hood Cave, of course!

Who knows, perhaps he hid there while on the run from the Sheriff.

Posted by Linda Matchett at 5:28 AM