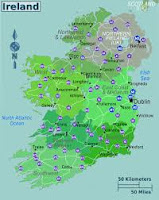 Both the Republic of Ireland and Northern Ireland declared a stance of neutrality during WWII. An interesting aside is that despite being part of the United Kingdom, the citizens of Northern Ireland were not subjected to conscription. The two countries dealt with their neutrality in different ways.

In the Republic, WWII is known as The Emergency, and the Council voted not to join either the Allies or the Axis Powers. Invasion by both England and Germany was prepared for, and normal government operations were suspended. There were several instances of German raids by aircraft that missed their intended British targets, and both the Allies and Axis Powers attacked Irish shipping fleets. However, the Republic remained neutral.

According to a variety of sources, extensive intelligence information was shared between the Allies and the Republic. Weather reports were regularly sent, and the invasion of Normandy was partially planned using information from the Irish. Downed Allied fliers were to be interned for the duration of the war, but many were allowed to escape. Some citizens favored fighting against the Axis, and as a result, more than 50,000 people served in the British military. Others wanted to side with Hitler in the hope that if Germany won, the British would be forced out, thus unifying the island. Wages were low and prices high. Cross-border smuggling and the black market flourished.

Concerned that siding with the Allies or the Axis could create another civil war, Northern Ireland chose to remain neutral. In the early days of the war, the country saw very little impact of the conflict. Rationing was minimal, they were left alone by the warring countries, and less than 40,000 of their sons and daughters enlisted in the military. Belfast was attacked in the April of 1941, but Northern Ireland maintained their position. However, they did allow American, British, and Canadian personnel to pass through the country as a staging area for various Allied campaigns.

Over the years, the Republic and Northern Ireland received criticism for the neutrality, but as with all governments they must decide what is best for their countries.