A Harvest of Blessing was inspired by a real life couple my husband and I met in Pensacola, Florida. Several years ago we were traveling and living in our RV full time. Since my husband is retired army, we generally stayed on military posts in their RV parks. This year we stayed at Pensacola Naval Air Station and attended the military chapel.

One Sunday we got to talking to a great couple and wound up going to lunch with them after church. Their story amazed me. They were both visiting the graves of their dead spouses when they met. They even pointed out the graveyard as we passed on the way to lunch.

Cupid went to work, and they eventually married. Their story has been on my mind for several years, and I finally got the chance to tell it in A Harvest of Blessing where my hero and heroine who're in their mid fifties meet in a graveyard. But that's where the similarity ends. I deviated from the real couple and made Nadia's husband a jerk and Jared's daughter an obstacle between the two of them. 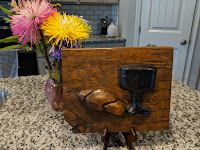 In the story, Nadia's son David is serving a tour of duty in Germany. I put him in Germany because my husband and I were there before he retired from the army. Wood carvings abound in the European country,  and I thought it would be fun to have David bring one of the lovely pieces—like the one I own—back home for his mom. The real wood carving used to hang on my mom's wall. Today it sits on a cabinet in my dining room.

The carving is special to me as it is the artist's rendition of a loaf of bread and a chalice, an important element in Christianity—communion or the Lord's Supper.

I loved writing A Harvest of Blessing as this is the first book I've penned where the characters are middle aged. I hope you'll enjoy reading it as much as I enjoyed writing it.

If there's one thing Nadia Maguire knows, Jon Maguire robbed her of a godly marriage and left her in financial ruin. The night he was killed in an accident, guilt threatened to suffocate her. She wasn't sorry he died.

When Nadia accidentally sits on a stranger's lap in the graveyard where Jon is buried, she's horrified to learn the good-looking guy with salt and pepper hair is her new boss.

Jared Abrams is a widower who longs to move on. He's intrigued by the beautiful woman who puts God first in her life. But as their friendship grows, an unexpected obstacle separates them—his daughter Sarah. No one can replace her mother. Especially not Nadia Maguire whose son harmed her in high school.

If Nadia can't find the funds to get her house ready to sell, she'll have to balance two jobs with no time left to nurture a relationship with the man she loves. Will she and Jared find a Harvest of Blessings, or a season of drought?