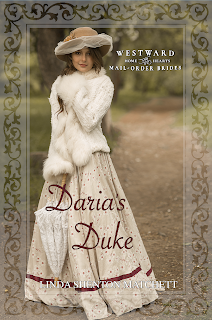 At long last, I'm thrilled to announce that Daria's Duke (Westward Home & Hearts Mail-Order Brides, Book 22) is now available! I had a blast researching and writing the story and learned more than I thought possible about the peerage in the United Kingdom. I also tossed in a bit of a Cinderella feel by giving poor Daria an evil stepmother and stepsisters and relegating her to the servants' quarters.

The story returns us to Rocky Mountain Springs, Wyoming where Rayne's Redemption takes place, so you'll run into some well-known characters as well as meet some new ones.

Will a stolen inheritance and false accusations thwart the chance for happily-ever-after?

After the death of her father, Daria Burke is thrust into the role of a servant by her stepmother. Locked in her room one night, Daria watches as the woman and her daughters sashay from the house wearing her mother’s gowns and jewelry. Realizing she’ll never be accepted as family, she flees the house and applies to be a mail-order bride. Then the sheriff arrives on the eve of her wedding with an arrest warrant. Can she prove her innocence or will she go to jail and lose her one chance at happiness?

Ewan McKay’s father was stripped of his title, property, and wealth, and sent to prison for crimes he didn’t commit. The stain of his father’s incarceration prevents Ewan from finding a woman willing to be his wife, so he uses a matrimonial agency to secure a mail-order bride. But when she’s accused of stealing, he wonders if he is destined to go through life alone.

Have you seen the book trailer?