Release Day: A Family for Hazel

Release Day: A Family for Hazel 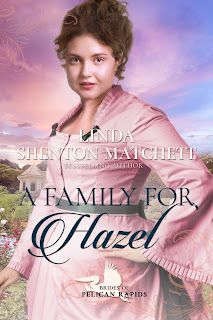 I'm thrilled to announce the release of A Family for Hazel, Book 18 in the "Brides of Pelican Rapids" series. We're back in Green Bay, Wisconsin where you met Miles Andersen and Vanessa Randolph from Vanessa's Replacement Valentine. As usual, I had a great time doing the research for the story and delved deeper into the Norwegian roots of the area with Olav Kristensen and his daughter.  You'll see some well-known characters and meet some new ones.

The book is available at the special launch price of $0.99 but only for a limited time, so grab your copy today!

Here's a bit about A Family for Hazel:

Can a widowed preacher who must marry to keep his job and an alleged thief find true love?

After the Civil War takes Hazel Markham’s father, and her mother dies of a broken heart, a friend of her parents hires Hazel as a companion. All is well until the woman’s lecherous son takes an interest in his mother’s assistant. When Hazel spurns his advances one too many times, the man frames her for theft, and she is fired. As a last resort she applies to be a mail-order bride, and to her dismay, her groom-to-be is a preacher. Will he believe her claims of innocence or reject her as unacceptable?

Olav Kristensen has no plans to remarry after being widowed five years ago, but when the church elders give him an ultimatum to find a wife or lose his job, he advertises for a mail-order bride. The woman who arrives attests she was unjustly accused of robbery at her last job, but when his daughter’s heirloom locket goes missing, he is hesitant to believe his bride-to-be. Will he lose his church and a second chance at love?