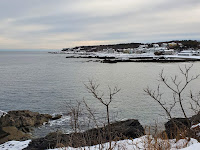 After spending a week in Lincoln, New Hampshire we traveled to the southern coast of Maine. Surprisingly, despite being “off-season,” the area was quite busy. We stayed in Ogunquit (beautiful place by the sea in Algonkian) and wandered into York several times during our stay.

A summer-resort town, York encompasses four villages: York Village, York Harbor, York Beach, and Neddick Harbor. Its history hearkens back to 1624 when it was first settled by British colonists who later renamed the area from the original Agamenticus – the Abenaki term for the York River. The area was claimed by the Massachusetts Bay Colony, but would be contested during numerous skirmishes between the French and English during the French and Indian Wars. Decimated during King William’s War (1688-97), attacks by natives continued through the years until they slowed with the French defeat at the Siege of Louisbourg (1745) and finally stopped after the Treaty of Paris in 1763.

Within a few years, York had become a major trading center, with dozens of warehouses and storage 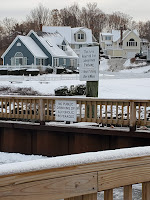 facilities being built along the harbor and main thoroughfares of town. Founding father John Hancock was a successful merchant who had property in York (now a museum). Unfortunately the Embargo Act of 1807 devastated trade, with the exception of lobstering that had been a large industry in Maine since the 1840s. The town lost much of its prosperity until after the Civil War.

Nathaniel Marshall, a well-to-do lawyer is credited with the idea of converting York into a summer resort. He purchased property and constructed a grand hotel in 1871 near the already existing Union Bluff Hotel. Soon other lodging establishments popped up. As the Gilded Age continued, the rich and famous built summer homes rather than stay in hotels. Many of these “shingle houses” still stand. 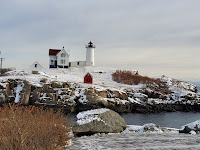 Cape Neddick Light (also called Nubble for having been built on a “nub” of land off Long Sands Beach) was built in 1879 for $15,000. Forty-one feet tall, the tower is lined with brick and sheathed in cast iron. Care for the lighthouse came under the U.S. Lighthouse Service until 1939 when the Coast Guard became caretakers. Automated in 1987, the town of York became the permanent guardian of the lighthouse in 1997.

York continues to be a summer resort with hotels, motels, B&Bs, and cottages mingled among the mansions, some of which have remained in families since the late 1800s. Three golf courses, four beaches, and Mount Agamenticus are just a few of the places visitors can play.

Have you been to Maine?