Ruth Brown, the protagonist in my Ruth Brown Mystery series, is a war correspondent during World War II. After arriving in London, she joins the hundreds of journalists from around the world in using the facilities at BBC’s Broadcasting House to write up and transmit her articles. The Art Deco structure, constructed between 1928-1932, is the organization’s first purpose-built home for radio broadcasting.
Art Deco is defined as combining “modern styles with fine craftsmanship and rich materials. Featuring rare and expensive materials such as ebony and ivory, the style was influenced by the bold geometric forms of Cubism, the bright colors of Fauvism, the updated craftsmanship of the furniture from the eras of Louis Philip I and Louis XVI, and the exotic styles of China, Japan, India, Egypt, and Maya. 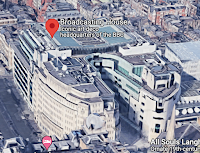 Described by many as appearing like a ship because of the accentuated front section bearing a clock tower and aerial mast, the building is located in Portland Place and Langham Place. Nine floors tower above the street, and three floors are underground. Architect George Val Myer in collaborated with civil engineer M.T. Tudsbery to design the structure that is asymmetrical because of complaints from residents on Langham Street that the building would cast shadows on their homes cutting off natural light. The front of the structure features statues of Prospero and Ariel from Shakespeare’s The Tempest with several others of Ariel around the sides. In the foyer, a statue of “The Sower” greets staff and guests.
When built, Broadcasting House contained twenty-two radio stations, but during WWII opened its door to British and foreign war correspondents. Unfortunately, for journalists stationed there, the building was bombed twice during the Blitz, experiencing heavy damage, several deaths, and many injuries.
The first bombing occurred on October 15, 1940 and was heard live on air by listeners who had tuned in for the nine o’clock news, that night read by broadcaster Bruce Belfrage. The 225 kg (496 pounds) bomb exploded at exactly one minute and fifty seconds past the hour, but it had actually landed earlier that same evening. The level of noise and other explosions prevented anyone from realizing the device hadn’t detonated. After it was found by the defense staff, they began to evacuate the building.
Following the incident, nearby residents made a formal complaint to the BBC that the structure was easy to sight from the sky and was being targeted by the Germans. Executive staff decided to “tone down” the building with camouflage paint, and within a month the job was complete. However, it seemed to have little effect. Just after ten o’clock in the evening on Sunday, December 8, 1940, a landmine floated down outside the entrance and exploded. There were fewer casualties but the damage was more severe than the first bombing. Afterward, the area was reinforced with a pillbox and concrete apron. During this time, a secret bomb-proof bunker was created, allowing the studios to stay on air even in the most devastating attack.
Despite bombs falling nearby on two other occasions, Broadcasting House suffered no more damage, however, Overseas Services division and some of the domestic staff moved to temporary studios on Oxford Street. BBC Radio continued to broadcast from the roof, even during air raids.
__________________
Under Fire

Set in April 1942, Under Fire, the first book in the Ruth Brown Mystery Series, tells the story of Ruth Brown whose missing sister jane is declared dead. Convinced her sister is still alive, Ruth follows clues from her small New Hampshire town to war-torn London trying to find her. Discovering that Jane has been murdered results in a faith crisis for Ruth, and she decides she must find Jane’s killer. During her search for the culprit, she runs into smugglers, resistance fighters, and the IRA, all of whom want her dead for what she knows.
Purchase Link: http://www.amazon.com/dp/B0743MS95H
Posted by Linda Matchett at 1:30 AM