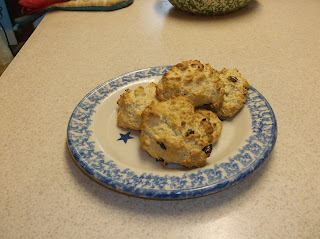 According to Wikipedia a rock cake, also called a rock bun, is a small, hard fruit cake with a rough surface resembling a rock. Rock cakes originated in Great Britain, where they are a traditional teatime treat, but are now popular in many parts of the world. They were promoted by the Ministry of Food during the Second World War since they require fewer eggs and less sugar than ordinary cakes, an important savings in a time of strict rationing. Traditional recipes bulked them with oatmeal, which was more readily available than white flour.


I found this recipe online at https://1940sexperiment.wordpress.com


They are certainly not as sweet as cake, but an acceptable substitute. I used dried cranberries because that’s what I had in the house. Not sure how readily available they would have been during the war. Perhaps currants or raisins would be a better choice. Give them a go. I think you’ll like them.
Rock Buns


Rub in the margarine


Add the sugar, dried fruit and the egg


Sprinkle with the sugar

Posted by Linda Matchett at 5:00 AM