At a time when mystery books seemed to be split into two schools – the hard-boiled detective story (think Raymond Chandler and Dashiell Hammett) or the cozy whodunit (Agatha Christie), author Helen Eustis burst on the scene with a new type of mystery fiction – psychological suspense. Her books featured innovative plots and commentary on gender and class issues of the 1940s and 1950s.

Born in Cincinnati, OH on January 31, 1916, Ms. Eustis passed away in January of this year. After a stint in business school, she graduated from Smith College in 1938. She then pursued a doctorate in English at Columbia University before giving up her studies in favor of a writing career. 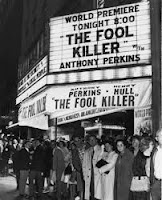 She was not a prolific fiction writer – only publishing seven novels during her career. But when she did write fiction, her work did well. Nineteen forty seven was a good year for her. The Horizontal Man won the Edgar for best first novel, and her short story An American Home received an O'Henry Prize. Her novel The Fool Killer was adapted into a 1965 film starring Anthony Perkins and Edward Albert.

When asked about her motivation in creating her characters in The Horizontal Man, a story in which a philandering English professor is murdered at a small college replete with psychologically unstable students and professors, she said she wrote it “because she knew so many people in college she would like to murder.”

In addition to her mystery novels, Ms. Eustis wrote for Harper’s Bazaar, Cosmopolitan, The New Yorker and other magazines. In later years she translated books written in French by authors including Christiane Rochefort and Georges Simenon.

Consider picking up one of these fascinating reads.
Posted by Linda Matchett at 4:00 AM