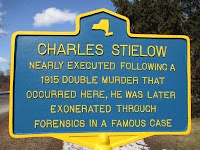 On the morning of March 22, 1915, Charlie Stielow walked out his front door and stumbled over the body of his employer's housekeeper, Margaret Wolcott. Hysterical, Charlie ran across the street to the home of his boss, Charles Phelps, where he discovered Mr. Phelps unconscious. By now the neighbors had been awakened, and one of them went for the local sheriff. A search of the house found the contents strewn about, and the victim's money missing.

Mr. Phelps was transported to the hospital where he later died. A private detective by the name of George Newton was hired to solve the case. He shortly unearthed the fact that Charlie Stielow owned a .22 caliber rifle-the same type weapon used in the two murders. Stielow was arrested shortly thereafter.

Proof the gun's involvement in the crime had to be determined, so Newton set about trying to find an expert. Enter the charlatan and forensic fraud, Albert Hamilton. Having awarded himself a phony medical degree, Hamilton advertised himself as a criminologist with areas of expertise in chemistry, cause of death, anatomy, firearms identification. The police claimed Stielow confessed to the killings and charged him with First Degree Murder. 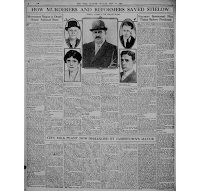 In court, Hamilton testified that his comparison of the bullets from the victims to test bullets fired from Stielow's gun showed the gun to be the murder weapon. At the end of the eight-day trial, Stielow was found guilty and sentenced to be executed. While he was in jail, several lawyers became convinced Stielow was innocent. The attorneys convinced the governor to grant him a stay of execution. Ultimately, Charles E. Waite, an employee of the New York Attorney General's Office proved without a doubt that Stielow's gun was not the murder weapon. After serving two years on death row, Charlie Stielow was released to freedom, never to be compensated for his wrongful incarceration.

And Albert Hamilton? Over the next ten years, he managed to insert himself into many high-profile cases, including the Sacco-Vanzetti and Lindbergh kidnapping trials.