I’m a volunteer docent at the Wright Museum of WWII. A question that is often raised while people are viewing the exhibits is “How could Germany let Hitler get into power?” Another is “Didn’t the German people see what he was doing?”

To answer those questions, one must understand the aftermath of WWI.

On November 11, 1918, an armistice (a cease-fire or truce) was declared. The German monarch Kaiser Wilhelm II was forced to abdicate and be exiled. The Weimar Republic was created, and Germany was forced to accept the Treaty of Versailles. Under the Weimar constitution, power was divided between the president, a cabinet, and a parliament. The office of chancellor was appointed by the president and was chairman of the parliament.

A result of the Treaty was that Germany had to accept the punishment inflicted on them by the Allies. This included huge reductions in the size of their military, reduction of territory, payment of war reparations in the amount of thirty two billion dollars (in money and in products), and acceptance of a “war guilt” clause. 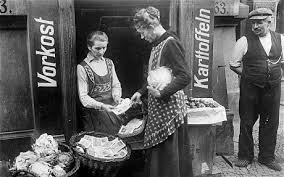 The combination of these requirements caused unrest and opposition. Violence erupted on the streets. When Germany defaulted on delivering coal and steel, French and Belgian troops occupied the Ruhr River valley (the center these two industries). Workers began to strike, and civil servants refused instructions from the occupying troops. The government then began to print more money to pay its debts, causing “hyperinflation” (literally a wheelbarrow full of Deutschmarks wasn’t enough for a loaf of bread). By 1923, one U.S. Dollar was equal to four trillion Marks.

Morale was at an all-time low. Shortly thereafter, the Socialist German Workers’ Party (NSDAP) or Nazi party rose up from the German working class. They blamed capitalism, the ruling class, communists, and trade unions for the country’s problems. The Nazis felt all of these issues were connected to a Jewish conspiracy, and to solve the problem the Jews should be deprived of German citizenship.

The Nazis were nationalist. Their goal was to make Germany great again, a power to be reckoned with. During the mid-1920s there were myriad political parties, and the Nazis were one of the smaller ones, but by the late 1920s the party had increased in size. The increased number of party members combined with Hitler’s charismatic personality caused the German people began to believe his rhetoric about who was to blame for Germany’s ills.

In 1930, with just 18.3% of the vote Nazi representation went from 12 seats in Parliament to 107 seats. They were now the second largest party and their march to power began.
Posted by Linda Matchett at 1:00 AM