Thanks again to The Passing Tramp for introducing me to yet another author from the “Golden Age of Detective Fiction.” Though largely forgotten in the shadows of Agatha Christie, Raymond Chandler, and Dashiell Hammett, F. Wills Croft was a prolific and well-known author during his years of publication (1920 to 1957). 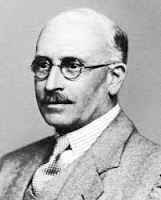 Freeman Wills Croft was born in Dublin, Ireland in 1879. His father passed away before he was born, and his mother married a vicar. Raised in religious home, he attended Methodist College and Campbell College. Croft was apprenticed to his uncle as an engineer in the railway system. He was quite good at his trade. By the time he left the trade to write full time, he was an Assistant Chief Engineer and had been involved in several high profile projects.

His career influenced his writing. In fact many of his stories contain a railway theme, and his focus on the apparently unbreakable alibi often centered around the intricacies of railway timetables. According to Mike Grost, Croft was a founder of the “Realist School” of detective fiction. Today those books are called police procedurals.

Crofts most famous character, who appeared in many of his books, is Inspector Joseph French. The antithesis of Dorothy Sayers’s Lord Peter Wimsey and Agatha Christie’s Hercule Poirot, French is a middle class police officer who is serious about his job. A family man, he has a wife and two children. In a nod to Croft’s religious upbringing, French neither drinks nor smokes.


Who is your favorite author of detective fiction from “The Golden Age?”
Posted by Linda Matchett at 1:00 AM