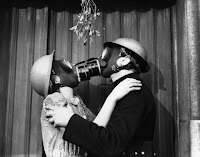 By December of 1940, England had been suffering under Hitler’s Blitzkrieg for months. Yet as the British people proved over and over during the WWII, they were a resilient population. Time reported in a December 30 article from that year, that “despite the bombs, life in the big London air-raid shelters, where over 1,000,000 people regularly spend the night, had become so standardized that many shelter Christmas parties were elaborate communal affairs with mass harmony singing, skits and dancing.” 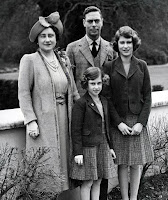 Even the royals exhibited a dark sense of humor about the impact of the war on the holiday when they sent out their annual Christmas card. Rather than using the typical family photo, the pair stood in front of the bombed out section of Buckingham Palace. The Times article referenced above also reported that a new sweet was making the rounds during the Christmas season. Plum pudding, a long held traditional dish of the holiday was replaced by Blitzmas pudding, “the same as the traditional Christmas pudding except that carrots were much used where the receipt
called for certain fruit.”

The Christmas goose was also missing, with Britons settling for mutton or something referred to as “cheap Empire beef.” (I don’t even want to think about what that could be!) Homes were decorated with lots of holly making up for usual mistletoe that could not be imported from France. Toys with a distinctive wartime flavor were all the rage: dolls in contamination suits for girls and war equipment for boys. No one wanted to be accused of being unpatriotic by purchasing peacetime items.

Perhaps the biggest change for the British people was that they were back to work on Boxing Day (December 26) for the first time since the holiday’s inception in 1871. But they knew that letting their guard down for even one day might prove fatal to the cause.

What is your most memorable Christmas?