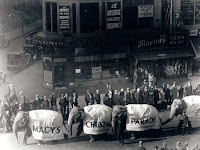 This year marks the 95th anniversary of the first Macy’s Thanksgiving Day Parade, however, it will be only the 92nd time participants will have marched the New York City parade route. After the U.S. entered World War II, the festivities were cancelled in 1942, ’43, and ’44, and the rubber balloons deflated and contributed to the government for use in war materiel-a total of 650 pounds.

Originally called the Macy’s Christmas Parade as a way to celebrate the store’s expansion (which now took up an entire city block), the majority of the participants were employees. Professional entertainers, bands, and animals from the Central Park Zoo (bears, elephants, and donkeys) were also included. In 1925 and 1926, lions and tigers were added, but it was determined they were too scary for viewers, so were removed. Santa may have brought up the rear of the parade and been popular with children, but the real reason for the event was to unveil Macy’s Christmas window displays. 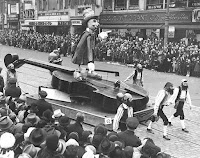 During the late 1920s, at the end of the parade, the balloons were released, and a monetary reward offered for their return. Apparently, the balloons included an address label on them so folks would know where to take them. Setting the balloons free was seemingly good idea until a cartoon character burst into flames when it hit a high tension wire, and a cat balloon sent a two-passenger plane plummeting. Needless to say, after those events, the tradition ceased.

Over the years, hundreds of celebrities have participated. The early years saw big names such as Harpo Marx, Jackie Gleason, Bob Hope, Diana Ross, Sammie Davis, Jr., and Tony Bennett.
In 1947, the film Miracle on 34th Street brought the parade to theatres, and the following year, the parade was televised for the first time by NBC. The estimated number of viewers for this years is 3.5 million people!

I grew up in New Jersey, and as part of our high school band marched in the parade each year. We’d leave the school at 3:00 AM (thanks mom and dad!) in order to arrive at our lining up location at the appropriate time. Those wool uniforms that were too hot during early September football games, barely kept up warm during the frigid early morning hours waiting to being. We’d surround the twirlers and flag girls, who wore tiny skirts and lightweight blouses, in an effort to block the wind and keep them warm. I’m not sure how successful we were.

Because of participating as a band member, the bands are my favorite part of the parade. What do you like best about the parade? 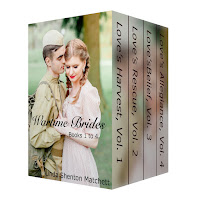 Inspired by exciting and romantic stories from the Bible, each of the Wartime Brides novellas is set during WWII. Read modern retellings about Ruth and Boaz (Love's Harvest), Shiprah and Puah (Love's Belief), Rahab and Salmon (Love's Rescue), and Rebekkah and Isaac (Love's Allegiance).

Purchase Link: https://amzn.to/33izJSa
Posted by Linda Matchett at 1:30 AM