Every author is excited when a new book releases, however, Murder at Madison Square Garden holds a special place in my heart. I spent many of my growing up years in New Jersey. We were close enough to New York City, that my parents often took us to visit. I also went on numerous field trips with school groups. One of the places I went on several occasions was the Garden, so it was very fun to have the facility be the main setting of my latest mystery novel, a traditional whodunit.

I hope you enjoy Murder at Madison Square Garden that features a couple of cameo appearances by famed aviator Charles Lindbergh. 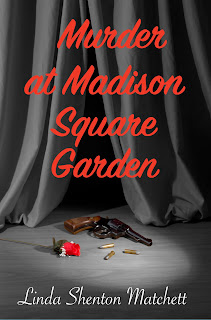 Here's a bit about the story:

The dream of a lifetime becomes a nightmare.
Photojournalist Theodora “Teddy” Schafer’s career has hit the skids thanks to rumors of plagiarism. With any luck, a photo spread with Charles Lindbergh at the America First Rally will salvage her reputation. After an attempted assassination of Lindbergh leaves another man dead, Teddy is left holding the gun. Literally. Can she prove her innocence before the police lock her up for a murder she didn’t commit?
Private Investigator Ric Bogart wants nothing to do with women after his wife cleaned out their bank account and left him for another man, but he can’t ignore the feeling he’s supposed to help the scrappy, female reporter who is arrested for murder at the America First rally. Can he believe her claims of innocence and find the real killer without letting Teddy steal his heart?
Purchase Link: books2read.com/u/31qK17
Posted by Linda Matchett at 1:30 AM