Traveling Tuesday: “Wagon Train”: What They Got Right

Ah, television, the medium that brought the world into our living rooms. In the 1950s and early 60s the small screen abounded with Westerns, reflecting a fascination with that part of our country’s past. TV offered us a rich smorgasbord of Westerns, from a lone-wolf bounty hunter to a straight-up U.S. Marshal to a hunky single dad sharpshooter. There were sheriffs, cowboys on perpetual cattle drives and hired guns. Some were humorous, like James Garner’s iconic Maverick, and some were family sagas, “Bonanza” and “The Big Valley.”

And there was “Wagon Train.”

The show premiered in 1957, in black and white, and was one of the first one-hour Westerns. It starred Ward Bond as the crusty wagon master Seth Adams, and Robert Horton as scout Flint McCullough.  It looped in many of the top stars of its day, including Bette Davis and Ronald Reagan, for guest shots. The format, focusing each week on the story of one family or passenger, allowed the show to go on, well, forever. When Bond died and Horton took off for the musical stage, John McIntyre and Robert Fuller took over as wagon master and head scout.  The show went to color, gave longtime bit players Frank McGrath and Terry Wilson co-star status, and expanded the staff to another young man and a teenage boy they picked up somewhere. It also went to 90 minutes, allowing for more complex plots and sometimes two story threads at a time.

But it was a Hollywood production, as accurate in its way as Cecil B. DeMille’s Bible epics. That is to say, it had its moments. 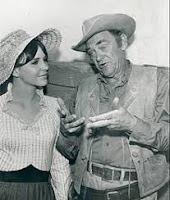 Let’s begin with a small point. Yeah, the women, especially the ingenues, always looked as if they had fresh makeup on, that’s a given. But the young single women, and the younger married ones, also wore their hair loose, in freefall down their backs. Not the most practical way to face torrential rains, drought conditions, the desert, cooking over a campfire, washing clothes in a stream or carrying your little brother when the wagon got too heavy. Still, these girls were always immaculately dressed and coiffed. The scouts and wagon master dressed for the trip in sturdy pants, boots, shirts and vests. But their passengers, especially the professional men, wore suits and the occasional string tie. Like the young girls, they were always “ready for my closeup,” even when repairing a broken axle or helping to shoe a horse. But the trail got messy, people. Staying alive trumped how you looked.

I was also amused to watch the social mores, when a “fancy lady from the East” had her maid set a dinner table with a cloth and china. After sixteen hours of travel under the blazing sun, sometimes walking, sometimes carrying those who couldn’t walk, a supper of beans and cornbread, on tin plates at the campfire, was what most people could hope for and what most women could produce.

The wagons themselves drew my attention, if not my ire. Like Snoopy’s doghouse or the Tardis, they somehow became larger when you got inside, holding everything from brass beds to pianos. But the wagons that crossed the prairie were a mere 4 feet wide and 10 feet high. I made mine wider for “Westward Hope,” a conscious choice which I addressed early on, so some of my people would have something to throw out when they got to the mountains. You do what you have to do.

And “Wagon Train’s” wagons were pulled by horses, while the more durable oxen were the beast of choice.
What did “Wagon Train” get right? A lot.

In both iterations, the writers and producers weren’t shy about showing the rigors of the trail. Axles broke, wheels came off, people died from cholera or snake bites or gunshot wounds. Water, and the lack of it, was crucial, and both shows feature episodes where people almost died in the desert.
The show gave a more nuanced portrait of Native Americans than some of its era, with Bond, Horton, McIntyre and Fuller showing respect for the Indians’ traditions and customs. Horton’s Flint, raised by Mountain Man Jim Bridger, could speak some of their dialects.  The show presented Indians who wanted to live in peace and Indians who, for whatever reason, didn’t. Sometimes they were more cartoonish than at other times, but so were the whites.

“Wagon Train” also captured the nuances of life on the trail, throwing together up to 100 strangers to endure appalling conditions. They had different traditions, customs, languages and reasons for going West. They had different religions or no religion. And for six long months they formed a small town of their own, bickering and gossiping, fighting each other under the hot desert sun because they couldn’t give voice to their real fears. Passions boiled over, and the wagon master usually had to intervene. There were threatened lynchings. 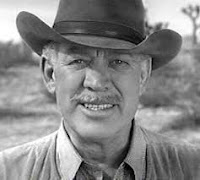 In the Ward Bond years there’s a wonderful two-part episode where a young man is accused of murder, and a retired law professor agrees to defend him. Seth Adams acts as judge. The producers bring us through a full murder trial, in the midst of the desert, with a few good men standing against hysteria and half-truths. When the young man is finally acquitted, a beaming Seth Adams says it proves that justice will be served, even on a wagon train.

And the show captured the spirit behind the Great Emigration, especially in the early years. Ward Bond has several speeches in which he holds forth on the reasons for this kind of trip: everyone on his train is looking to make a new start.   It’s a place where people can be free. McIntyre’s Chris Hale speaks for every emigrant when he says in one episode, “You’re going where the only time you have to look down is when you tie your boots.”
About Settler’s Hope 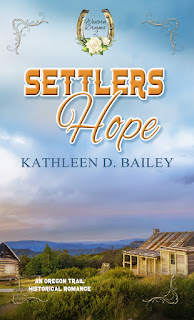 After years of wandering, Pace Williams expects to find a home in the Oregon Country. He doesn't expect is to fall in love with a fiery Irishwoman bent on returning home to avenge her people.
Oona Moriarty expects one thing: to exact revenge on the English overlords who took her home. She doesn't expect to fall in love with a man who looks like he's been carved from this Western landscape.
Together they vow to trust the unexpected and settle into a life, but when Pace's ancient enemies threaten to destroy the life they're building, Oona must choose between helping the man she loves and seeking the revenge she craves.

About Kathleen Bailey: Kathleen Bailey is a journalist and novelist with 40 years’ experience in the nonfiction, newspaper and inspirational fields. Born in 1951, she was a child in the 50s, a teen in the 60s, a young adult in the 70s and a young mom in the 80s. It’s been a turbulent, colorful time to grow up, and she’s enjoyed every minute of it and written about most of it.

Bailey’s work includes both historical and contemporary fiction, with an underlying thread of men and women finding their way home, to Christ and each other. Her first Pelican book, ‘Westward Hope,” was published in September 2019. This was followed by a novella, “The Logger’s Chrsitmas Bride,” in December 2019. Her second full-length novel, “Settler’s Hope,” was released July 17, 2020.

She lives in New Hampshire with her husband David. They have two grown daughters.
For more information, contact her at ampie86@comcast.net; @piechick1 on Twitter; Kathleen D. Bailey on Facebook and LinkedIn; or at http://www.kathleendbailey.weebly.com.