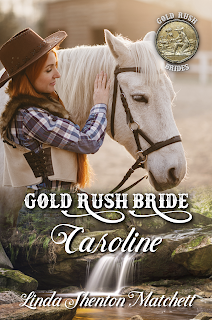 I'm thrilled to announce today's release of Gold Rush Bride Caroline, Book 2 in the multi-author Gold Rush Brides series. Set during the Pike's Peak rush of 1859, the book tells the story of Hannah and Jesse Vogel's (Book 1) daughter.  An often-overlooked event, this rush lasted from July 1858 until the creation of the Colorado Territory in February 1861 and attracted more than 100,000 prospectors.
Participants were called "Fifty-Niners" after 1859 (the peak year of the rush) and used the motto Pike's Peak or Bust. Despite its name, the rush occurred about eighty-five miles north of Pike's Peak. Lots of mining camps were created, some of which became cities in their own right, while some became ghost towns after the end of the rush.
In celebration of the launch, I'm doing a fun giveaway you can enter and share with your friends. You are going to love the prizes because each one is handmade by an artist on Etsy. In addition to an autographed copy of Gold Rush Bride Caroline, the winner will receive a framed canvas by TheWoodedLane featuring Psalm 121:1-2 I lift up my eyes to the mountains,  a pair of handmade "mountain" tea towels by Kettenglied, a handcrafted lace bookmark from JAustenBoutiqueCo.  If an international winner is chosen, he or she will win an ebook edition of Gold Rush Bride Caroline and a $50 Visa Gift Card. 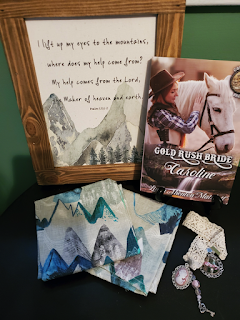 I hope you'll enter the giveaway and help me spread the word about Gold Rush Bride Caroline. Meanwhile, you can grab your copy here.
Have you seen the book trailer?
About Gold Rush Bride Caroline:
She thinks he’s high-handed and out for her gold. He thinks she’s difficult and money-hungry. Will they discover that love is the true treasure?
Scarred in a childhood accident, Caroline Vogel has yet to find a man willing to marry her, so she heads to the Pike’s Peak gold fields to pan enough ore to become a woman of means. When she and the handsome assistant trail boss hit it off, she begins to hope her future may not be spent alone. Then she catches wind of dark secrets from the man’s past, and she’s not sure what or who to believe.
Orphaned as a teenager, Oliver Llewellyn stole to survive, then used his skills for the army during the war. Nowadays, he applies his knowledge to catch dangerous thieves for the Pinkerton Agency, so guarding a young woman during a wagon train journey should be easy. But he didn’t count on the fact she’d angered a man bent on revenge. He also didn’t count on losing his heart.
Purchase link: https://amzn.to/3e1Xeac
Posted by Linda Matchett at 1:30 AM