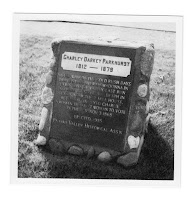 Stories of extraordinary people abound from the Old West. The trick is separating fact from fiction, truth from legend. One such story revolves around Charley Darkey Parkhurst, also known as One-Eyed Charley, Six-Horse Charley, and Mountain Charley who worked as a stagecoach driver, then later farmer and rancher.

The most unusual aspect of this tale is that Charley was a woman. Scholars speculate as to why Charlotte chose to live her life as a man, but because her gender wasn’t discovered until after her death, the real reason followed Charley to her grave.

Little is known about her early years other than that she was born in Sharon, Vermont, in 1812. She reportedly had two siblings, one of whom died as a toddler, and her mother passed away shortly after Charley’s birth. Nothing is mentioned of her father, but perhaps he’s the one who took her to an orphanage in Lebanon, New Hampshire where she lived until she ran away at the age of twelve. It was at that point, Charlotte became Charley.

According to one account, Charley met livery owner Ebenezer Balch in Providence, Rhode Island. Balch took the young woman under his wing and taught him about being a stable hand as well as how to be a stagecoach driver. She worked for Balch for some period of time before moving on to Massachusetts and Georgia.

In 1848, Charley decided to take her chances in the California gold rush and boarded a ship to San Francisco. The vessel stopped in Panama where she met John Morton, owner of a drayage business. He recruited Charley to work for him. She later worked for John Birch’s California State Company and the Wells Fargo Company.

At some point, Charley was involved in an accident during which a horse kicked her in the face,

causing her to lose her left eye. She took to wearing a patch that covered much of her face, furthering her disguise as a man. Over time, she gained a reputation as “one of the finest drivers on the West Coast.”

Driving a stagecoach was not only difficult but dangerous. Drivers carried mail as well as gold and passengers and had to deal with hold-up attempts, rattlesnakes that could spook horses, bad weather, and treacherous roads, some of which were no more than trails. Charley’s routes in northern California were the Stockton to Mariposa and San Jose, San Jose to Oakland, and San Juan to Santa Cruz. Described in several accounts as short and stocky, a whiskey drinker, cigar smoker, and tobacco chewer, apparently Charley was up to the task.

When the railroads cut into the stagecoach business, Charley retired and moved to Watsonville, California where she worked at farming and lumbering. She died in 1879 of tongue cancer, and when neighbors came to lay out the body for burial, her identity as a woman was revealed. An interesting aside is that one site claims the examining doctor determined that Charley had given birth at some point.

After the LA Times reported the discovery, national newspapers picked up the sensational story, including this piece from the January 9, 1880 edition of The New York Times: “Thirty Years in Disguise: A Noted Old Californian Stage-Driver Discovered after Death to be a Woman: 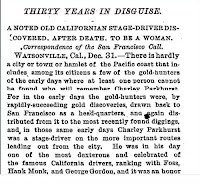 He was in his day one of the most dexterous and celebrated of the famous California drivers ranking with Foss, Hank Monk, and George Gordon, and it was an honor to be striven for to occupy the spare end of the driver’s seat when the fearless Charley Parkhurst held the reins of a four- or six-in hand...Last Sunday in a little cabin on the Moss Ranch, about six miles from Watsonville, Charley Parkhurst, the famous coachman, the fearless fighter, the industrious farm and expert woodman died of cancer on his tongue. He knew that death was approaching, but he did not relax the reticence of his later years other than to express a few wishes as to certain things to be done at his death. Then, when the hands of kind friends who had ministered to his dying wants came to lay out the dead boy of the adventurous Argonaut, a discovery was made that was literally astounding. Charley Parkhurst was a woman.”

As they say, truth is usually stranger than fiction.

A brand-new widow, she doesn’t need another man in her life. He’s not looking for a wife. But when danger thrusts them together, will they change their minds...and hearts?

Hannah Lauman’s husband has been murdered, but rather than grief, she feels...relief. She decides to remain in Georgia to work their gold claim, but a series of incidents makes it clear someone wants her gone...dead or alive. Is a chance at being a woman of means and independence worth risking her life?

Jess Vogel never breaks a promise, so when he receives a letter from a former platoon mate about being in danger, he drops everything to help his old friend. Unfortunately, he arrives just in time for the funeral. Can he convince the man’s widow he’s there for her protection not for her money?

Gold Rush Bride: Hannah is the first book in the exciting new series Gold Rush Brides. Steeped in romance, intrigue, and history, the story will keep you turning pages long into the night.