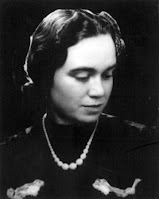 I love to immerse myself in the books that would be read by my characters. It’s especially fun for me to sometimes find little-known authors or authors who were wildly popular at the time but have fallen into obscurity. Today’s author, Mabel Seeley, falls into the latter category.

Born Mabel Hodnefield in 1903, in Herman, Minnesota, a tiny hamlet nearly two hundred miles northwest of Minneapolis. Still small, the town boasted a population of 437 in the 2010 census. I can’t imagine how much smaller it must have been in the early part of the last century.

Mabel married fellow UM student Kenneth Seeley in 1926, and they moved to Chicago where she got a job writing advertising copy for a department store (a background that would be the setting of her first book, The Listening House published in 1938). After her husband developed tuberculosis, they returned to Minnesota for his medical treatments. He recovered, but they divorced sometime later.

After WWII, she and her son moved to Colorado. An avid midwesterner, Mabel set all her books in

Minnesota. She delved deeply into her research for each book, going so far as to visit a North Shore lake at night time to capture an eerie feeling. She also ran through fields of tall, dry grass to see how grasshoppers respond when startled. For another book, she spent time in her uncle’s grain elevator to experience the wind whistling in the bins and to hear the talk of farmers. (Now, that’s research!)

Most readers, even devoted mystery readers, are unfamiliar with her work, but she was highly popular during her lifetime. Her books were highly praised in some of the most noteworthy publications of the day such as Saturday Review and The New Yorker. The Saturday Review of Literature named The Crying Sisters (1939) best mystery of the year, and The Chuckling Fingers won Mystery of the Year award in 1941. An early member of Mystery Writers of America, she served on the organization’s first Board of Directors. 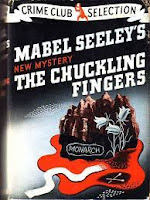 Long before modern feminism, Mabel wrote female protagonists who were “smart, frank, and strong-willed.” The characters are typically middle class working such jobs as librarian, copywriter, and stenographer. The heroines are not private investigators, but rather women caught in unusual circumstances requiring them to fight to save those they love.

Unfortunately for readers, Mabel married attorney Henry Ross in 1956 and chose to stop writing, telling one reporter that she did so to devote more time to her marriage. She passed away on June 9, 1991.

About Murder at Madison Square Garden