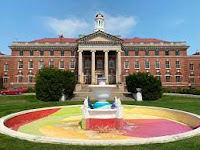 In my upcoming release, Estelle’s Endeavor, my male protagonist is sent to Walter Reed General Hospital for further care after he is injured during the invasion at Normandy during WWII. I drove past the hospital during my commute in the early days of my career but rarely gave it any thought. Living in the Washington, DC/suburban Maryland area, one tends to get used to the various government facilities and installations that dot the landscape. During my research for the story, I turned up many interesting facts, especially about the hospital’s namesake.

As far back as George Washington’s era, the army medical staff realized the need for a separate military hospital campus (or reservation as one source called it), but the dream would not become reality until after the Civil War. The Washington Arsenal, located on a peninsula where the Potomac Anacostia Rivers merge, was the site of a small hospital from 1898 to 1909. It is said that Dr. Walter Reed was assigned to the Arsenal as camp surgeon from 1881 to 1882.

Reed was brilliant by all reports. He finished his two-year program in one year and received his degree at seventeen years of age from the University of Virginia in 1869. He then moved to New York where he received his second degree from Bellevue Hospital Medical College and went on to work at several hospitals within the city.

After marrying, he decided that joining the army would give him a steady income and allow him to

travel. He was commissioned as a first lieutenant assistant surgeon, and for several years he and his wife moved around the country for his assignments. At one point, he was stationed at Fort McHenry, and he took the opportunity to attend classes at Johns Hopkins University.

Bacteriology, infectious diseases, and the concept of germs was in the forefront of the study in medicine during the 1880s and early 1890s, and Reed began research into the cause of typhoid and yellow fever. His studies were breakthroughs in many ways. Not only did he disprove the theory that the diseases were spread through the air, but he was also able to prove mosquitos as the carriers. Additionally, his study was the first time test subjects signed consent forms.

In 1902, Reed died from peritonitis after an emergency appendectomy, and his friend and fellow physician Lt. Colonel William Borden was the driving force to get Congressional support to create a true medical center. It took several years, but funds were finally appropriated in the amount of $192,000, and the new facility welcomed its first ten patients on May 1, 1902. Capacity at that time was eighty beds, and the facility has grown to 5,500 rooms on nearly thirty acres.

Since its inception, Walter Reed has served more than 150,000 active and retired personnel from all branches of the military. Some of its more famous patients include Major General William Donovan (founder of the OSS), John Foster Dulles (Secretary of State), General Dwight D. Eisenhower (President of the United States), Mamie Eisenhower (First Lady), General John Pershing (Commander, U.S. Expeditionary Forces WWI), and General Douglas MacArthur (US Army Chief of Staff).

Pre-order link: https://amzn.to/3JlKBWe
Posted by Linda Matchett at 1:30 AM