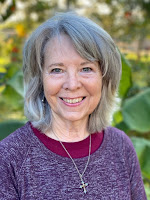 LM: Welcome! Congratulations on your upcoming release Whirlwind. You write Biblical fiction. How did you choose this particular story to write?

Dana: In my daily quiet time, I read through the Bible each year. One day the reading included the passage where the prophet Elijah prayed for the widow's son to be returned to life. When the boy opened his eyes, it was as if I was there - I choked up. As I sat meditating on the ancient words, I wondered, “What would it be like to die, go to the other world, and be brought back again?”

My attempts to answer that question resulted in Rain, my debut novel. Whirlwind came about when readers asked for more about Elijah and other characters in Rain. I wasn’t ready to leave them either, so Whirlwind focus on more stories in Elijah’s life, culminating with his ride in a chariot of fire.

LM: Whirlwind is the second book in the Whispers on the Wind series. Did you start out to write a series or did it just happen? How many books do you have planned?

Dana: My publisher, Miralee Ferrell at Mountain Brook Ink, suggested a series would be a good idea, and I knew there was more than enough biblical content for at least another book or two. After Whirlwind, I have in mind two more books, which will feature Elijah’s successor, the prophet Elisha.

LM: Research is necessary for any book, but for historical fiction in particular. What did you do to research Whirlwind? How difficult is it to find information about the time period?

Next comes history. There’s a lot of available history on Israel’s Iron Age 2. Dates are challenging because there are many opinions about what happened when. It’s challenging to keep events and characters’ ages in sync. A baby born at the beginning of a war, needs to age when it ends a year later.

Dana: Like many authors, I’ve been writing since childhood. Though I had non-fiction publishing credits beginning in high school, I longed to write fiction. The most interesting part of my publishing journey came when I retired in 2019. One day, I thought back on my attempts to find an agent or publisher and prayed, “Lord, I’ve been trying to find a publisher for Rain. I finally understand. All this time, you’ve been telling me ‘no’, not ‘wait.’ Shall I try to self-publish or put the book in a drawer?” I waited a minute. Self-publishing seemed just to hard. “Maybe I should just quit writing altogether and enjoy my retirement,” I concluded.

The next day when scrolling through Facebook, I received an Instant Message from a stranger. “Hello. 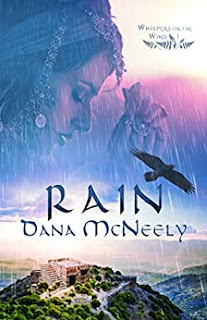 Are you the Dana McNeely who wrote Rain, and if so, have you sold it yet?” Like you, I cringed a little at that first “Hello.” A troll? But the rest of the message had me intrigued. Angela Ruth Strong introduced herself. She had judged Rain in the OCW Cascade contest years ago, loved it, and wanted to reread. When she could not find it on Amazon, she used her sleuthing skills to find my name from the double-blind contest. She told her publisher, who said she’d like to read it also. It became apparent the Lord’s hand was in it, when a few weeks later I had a publishing contract. An overnight success in thirty-short years!

Dana: There’s a time of preparation, reading the Bible, praying, consulting commentaries, maps, and some of my favorite research books. Then I think of and journal about two or three main characters who will witness the events and tell the story.

After that, I begin writing. I aim to begin in the mornings, right after my devotional time with my husband. I write for about two hours, then take a walking break. Repeat in the afternoon, substituting housework for walking. It’s good exercise, too!

LM: What is your favorite aspect of writing?

Dana: The actual writing is my favorite, especially after I’ve written at least three chapters. That seems to be the point I am comfortable in my characters’ voices and excited to sit at the computer each day to continue their stories.

Dana: How about two? I would love to visit the Holy Land with my husband and visit more of the United States, especially the National Parks.

Dana: Two things. First, join a writers’ group for support and learning opportunities. There are many online and in-person choices. Two of my favorites are American Christian Fiction Writers (ACFW) and Faith, Hope, and Love Christian Writers (FHL-CW.) ACFW also has local chapters, which are great. Second, have a writing schedule. I aim to write every day except Sunday. I can’t always do that, but I don’t let too many days go by without writing at least one sentence. The trick is, one sentence leads to another!

A king’s downfall and a love that transcends war
SPURNED BY POTENTIAL SUITORS, Miriam travels to Jezreel to care for her cousin’s son. There, the precocious seven-year-old works his way into her heart. When Arameans swarm the land like locusts, Miriam focuses on the safety of her young ward but promises adventures beyond the city walls when the war ends. Gershon, a quiet and kind vintner, is happily building a life for his wife, son, and aging parents. But when his wife dies during childbirth and war looms on the horizon, he must make a decision—will he take a new wife before his heart can mend?

Meanwhile, Dov, a young officer crosses paths with the “bird girl” he remembers from the past, now grown to womanhood. That she is a beautiful woman matters not, as he is a career soldier. Unexpectedly charged with leading Ahab’s army against the Arameans, Dov anticipates death and defeat in Samaria, but when a prophet pledges victory, Dov vows to fight to the end. When an unlikely victory brings freedom, a bright future seems imminent. Then one afternoon Miriam witnesses a tragedy and must flee with the boy to keep them both safe. With henchmen on their trail, will they find refuge—and her heart the home she’s longed for?

Purchase Link: https://amzn.to/3DvvaYY
Posted by Linda Matchett at 1:30 AM