Mystery Monday: The Mystery of Codebreaking

Some scholars differentiate between codes and ciphers, with codes requiring a code book and ciphers using mathematical algorithms. For the purposes of this blog I will be lumping them together into the single concept of secret messages.


Unfortunately mankind has been fighting each other since the beginning of time, and the use of codes has been an integral part of war from early on. One website spoke of the “Caesar Code,” named because Julius Caesar used it himself. It is a fairly easy code to break, but is the basis for many more complex codes. Other codes are: public key, transposition, scytale, steganography, book cipher, and playfair cipher.

Code breaking is much more difficult than code writing. According to Charles Latham, an instructor stationed in Arlington, VA during WWII who taught U.S. Army correspondence courses, there were “two courses in cryptology and four in cryptanalysis, each with ten lessons. In the advanced courses, one lesson could take a couple of months.” He went on to say “solving was a process of trial and error, and when a message finally began to ‘break,’ it gave you a real sense of accomplishment.” 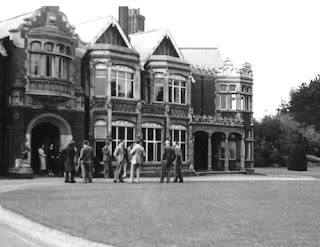 Britain’s central site for code breaking during the war was located at Bletchley Park, located in Buckinghamshire about fifty miles outside of London. The mansion sits on nearly sixty acres and by the end of the war the property held nearly two dozen wooden huts and eight brick “blocks.” U.S. code breaking did not seem to be centralized as there were locations around the country.


There have been numerous books and movies about code breaking during WWII, the most recent being The Imitation Game which is about Alan Turing. As important as Mr. Turing’s accomplishments were, it is equally important to remember the number of unheralded, unnamed staff who worked at Bletchley Park, and other similar locations during the war.
Posted by Linda Matchett at 4:00 AM