Recently, I was conducting research and stumbled on a story about Ezra Pound, a expatriate American poet who was paid by the Italian government during WWII to make radio broadcasts criticizing the United States and President Roosevelt. Pound was arrested in 1945 on charges of treason and sent to the Disciplinary Training Center in Pisa for incarceration.

Each theater of operation has several of these facilities in which prisoners were divided into four groups: 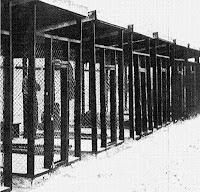 Upon his arrival, a prisoner received a handbook that outlined what was expected of him during his incarceration. The introduction to the manual reminded the prisoner that he had deprived the Army of two soldiers - the prisoner himself and his guard.

The facilities typically contained enough land to provide the rigorous and often harsh training the prisoners would undergo. Rehabilitation took many forms, including an orthopedic shoe repair program at the center in Somerset, England.

After Japan surrendered in September 1945, the War Department ordered that all Disciplinary Training Centers be inactivated as soon as practicable.  By December of that year, all prisoners had been transported to the U.S. on modified liberty ships.

Like many people, I had not considered this aspect of the war - that not all those in the armed forces would serve with honor and distinction. A sobering thought.
Posted by Linda Matchett at 1:00 AM