Jack the Ripper. The Black Dahlia. Bugsy Siegel. Bob Crane. The public is intrigued by unsolved mysteries no matter how long ago they occurred. On the other hand, the police are no doubt frustrated. As time passes, the trail gets colder and colder.

One such case is that of Sir Harry Oakes, an American who later became a British citizen and moved to the Bahamas to avoid paying income taxes on the millions he earned from his gold mine. Born in Sangerville, Maine, Oakes traveled to Alaksa during the Klondike gold rush, then made his way to Ontario where he finally struck iron ore in 1912. Later that same year, another of his mines struck gold. Ultimately, the gold mine was thought to be the second most productive mine in North America. He claims that he paid nearly $18,000 per day in taxes because of his success.

A multi-millionaire by 1921, Harry decided to go on a world cruise. He met his wife Eunice on the 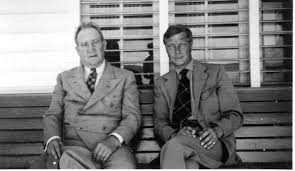 voyage, and they married almost immediately. They went on to have five children, and he became somewhat of a philanthropist. As the years passed, he tired of paying exorbitant taxes, so he became a British citizen and moved to the Bahamas in 1935. He was knighted by King George VI in 1939. Life was good.

The prime suspect was his son-in-law, Alfred Fouquereaux de Marigny. De Marigny was a playboy and heartily disliked by most of Bahamian society. He had been seen arguing with Oakes in the recent past and was known to be regularly short on money. An interesting aside is that the Duke of Windsor (then governor of the British colony) ordered the local criminal investigation division to step aside in favor of two American detectives who regularly provided security for the Duke when he was in the U.S.

At the trial, it was determined that the detectives framed de Marigny by claiming to have found a fingerprint at the scene. In reality, the print had been lifted from the cellophane wrapper on a cigarette package the suspect was giving during questioning. The jury acquitted de Marigny in less than two hours, but he was sent packing off the island a few weeks later.

The case was never reopened, nor was Harold Christie, a guest in the house on the night of the murder, ever questioned. The official autopsy lists a blow to the head as the cause of death. However, de Marigny claims a Nassau doctor told him that Oakes had been shot-a story that coincides with the testimony of the two estate guards on duty.

Books have been written, and movies have been produced, which draw their own conclusions. But the case remains unsolved.

Sometimes forensics have advanced since the time of the original crime creating the opportunity to solve cold cases. Will the murder of Sir Harry Oakes be one of those opportunities?