Airplane spotting is a hobby that has been in existence since airplanes were invented. However, during World War II, it became a matter of life and death. Spotters were civilian volunteers who were trained to identify planes (and their associated country), and to determine where they were headed.

After the attack at Pearl Harbor, the Army Air Force (at that time the Army and the Air Force were one organization) created the Ground Observer Corps in an attempt to prevent future attacks. At their peak, the GOC has over a million and a half members. Posts were manned around the clock, mostly along the U.S. coasts. Some of the posts were as simple as a chair and an umbrella at the top of a bluff to a special built structure. 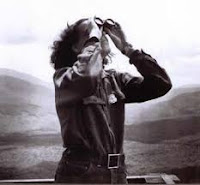 Observers needed a telephone, a set of binoculars, and a pad of flash message forms. Most important was the official identification book that included photographs and silhouette drawings of both Axis and Allied war planes. When an airplane was seen or heard, the observer recorded as much information as possible, and then called it in to an Army Filter Center.

Not everyone was cut out to be an observer. Passing a strict training course was required. Students had to identify airplane models that were 1/72 size from thirty feet away. Doesn’t sound like a lot, but many were unable to do it. Over 500,000 models were used in classes around the country, and the government called on children and model airplane enthusiasts to fill the need.

Would you have fit the bill as a Ground Observer?
Posted by Linda Matchett at 1:00 AM