I'm pleased to introduce Diane Theiler, author of Black Mamba and Heaven's Bait. I hope you'll take a few minutes to get to know her.


Linda: You’ve been writing since you were a child. When did you know you want to pursue publication?


Diane: I’ve always wanted to publish but never knew how. It wasn’t until I met Jean Kinsey and Becky Kelley at a book signing that things turned around. They ended up taking me under their wing and mentoring me.


LM: Congratulations on publishing your latest novel. What was the inspiration for the story?


Diane: My latest novel was written for daughter Christene. I plan to write a book with each of my children as the main character. It’s a part of me they will be able to keep after I am gone. And of course, no one wants to be in a boring book, so it had to be Suspense. 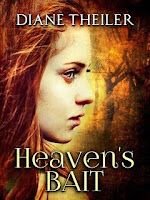 
Diane: In Heaven’s Bait, I had to have a name that meant King but the word also had to sound like a person’s name. I went to the translator and translated King in a ton of languages to see what came up. I decided on a name, but halfway through the book, for whatever reason, I looked it up to show someone and low and behold it didn’t come up as King. I didn’t realize it wouldn’t translate back the same. Anyway, I had to go back to translator and start again.


LM: The age old question for writers-are you a “pantster” or a plotter?


Diane: A panster – It works for me. If I could be a plotter I think it would make things a lot easier. However, when I’ve tried, I’ve never been able to follow the plan. Whether its God that’s inspiring me or my characters that want to tell their own story, it always comes together at the end.


LM: Are any of your characters based on real people?


Diane: They are based on the essence of people. Maybe their personality, their sense of honor, or their individual struggle. Then of course Christ, in Heaven’s Bait is portrayed as I see Christ. Patient, gentle, kind, giving us free will, etc. But I also show how he hurts for us when we struggle, when we don’t trust Him, or refuse to accept his help. Satan is also my portrayal of Satan. Clever, conniving, biding his time. 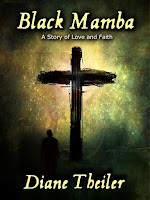 Diane: I am working on Unintentional Deception. Cathleen Edwards, raped as a teenager, gives up the child for adoption and leaves town unable to face what happened. She’s sure God can never forgive her. When she loses her job, she has no option but to leave the man she loves behind and ask her best friend Simon for help. Matt Kellner follows her; sure she is the one he’s been praying for. When he arrives he isn’t sure what to think. Four men surround him and threaten him, claiming she belongs to them. Not willing to give up, he trusts the Lord and continues to pursue her in spite of their threats.


LM: What are your passions outside of writing?


Diane: I like to try new things. I loved sky diving, getting covered in paint, ziplining, and writing. Didn’t care much for bungi jumping although it was fun after I jumped. I also like quiet times where I can set and meditate, work puzzles, spend time with family and friends, and just enjoy the peace and quiet after everyone leaves.


LM: What else do you want folks to know about you?


Diane: The Lord has worked on my heart for years about witnessing. I kept telling him I wasn’t a good speaker. Every time I said those words, he’d say “Write a book.” I fought writing for years. Probably close to thirty years. Then one day I gave up and started writing. I loved it! I’m so sorry waited so long.
Posted by Linda Matchett at 1:00 AM