When I was in college, the 1982 World’s Fair was held in Knoxville, Tennessee. As a young adult, it was an amazing experience to see the hundreds of thousands of people from all over the globe and to visit the eclectic displays. I must admit to being very wide-eyed each time I attended.
Those who went to the 1939 World’s Fair must have felt the same way. In a world that had struggled through a crippling depression, many people had been severely impacted by loss of savings accounts and jobs. Traveling was done primarily to find work, not take a vacation. But in 1939, life was improving. Roosevelt’s programs had brought the country through the worst of times, and U.S. citizens were guardedly optimistic. Little did they realize that six months later, Hitler would invade Poland and plunge the world in catastrophic conflict. 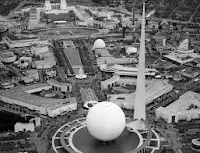 Held in Flushing Meadows on a site that had previously been a dump site, the fair opened on April 30th  to a crowd of more than 200,000 visitors. The grounds covered more than twelve hundred acres or nearly two square miles, and touted the futurist theme of “Dawn of a New Day.” Exhibits included Westinghouse’s time capsule that wasn’t to be opened for 5,000 years, a robot that talked, a science fiction convention, the introduction of nylon fabric, and early televisions. The structures at the fair were unusual, many of them considered architecturally experimental. The fair colors were orange and blue, and most of the building included one or both colors in their design. Only the Trylon and Perisphere, known as Theme Center, were completely white.
The fair operated for two seasons, from May to October in 1939 and 1940. Wikipedia said it best: “Although the U.S. would not enter WWII until the end of 1941, the fairgrounds served as a window in the troubles overseas. German was the only major world power that did not participate. The pavilions of Poland and Czechoslovakia did not open for the 1940 season, and the USSR Pavilion was dismantled after the first season, leaving an empty lot. Also in 1940 a time bomb exploded near the British Pavilion. When the fair closed, many of the European staff were unable to return to their home countries, being stranded in the U.S.”

Fairs continue to operate intermittently. This year’s event is a horticultural exposition in Turkey and will close at the end of this month. Kazakhstan will host Expo 2017 with a theme of Future Energy, certainly a hot topic.
Have you ever attended a World’s Fair or similar event?
Posted by Linda Matchett at 1:00 AM