Forensic Friday: Forensics during the 1940s

Forensic Friday: Forensics during the 1940s

Although in some ways, forensic science was in its infancy during the 1940s, police officers and detectives took evidence collection seriously, recognizing that physical clues were a crucial part of any investigation. These 1940s photos show how much things have changed since then: 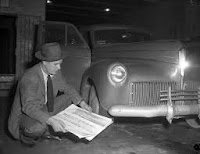 Crime lab employee James Haas compares an imprint of tire marks found near a murder victim with those of the car belonging to the suspect.

Police getting rid of "hooch," better known as moonshine. It looks to me as if it is being flushed down the town's water system. I don't think that's how it's done nowadays.

There was no indication of what they fellas were looking for, but it seems to me they might be contaminating a crime scene by standing in the middle of whatever that is on the ground!

An American soldier was convicted and hanged for the murder of three women in Melbourne, Australia. With any luck the barrier the police officers are standing behind kept too many folks from marching through the crime scene.
Posted by Linda Matchett at 1:00 AM