Unsung Female Sleuths of the 1940s

Unsung Female Sleuths of the 1940s

When asked to list famous fictional sleuths from the 1940s, you probably think of Sam Spade, Philip Marlowe, and Philo Vance. Maybe you also come up with Nick and Nora Charles, and of course, there are always Miss Marple and Hercule Poirot.

But with the 1930s and 1940s being the “Golden Age of Detective Fiction,” there are dozens of others, unfortunately many of whom have faded into obscurity. Here are just a few of the female sleuths, you’ll want to investigate:

Lady Lupin: A vicar’s wife, Lady Lupin was featured in only four novels written by Joan Coggin, the daughter of a vicar herself. Born in 1898 in Lemsford, Coggin and her family moved to Eastbourne, a small seaside village in England, after the death of her mother. She worked as a nurse during WWI, and after the war worked with the blind, writing novels on the side. Her character Lady Lupin is a 21 year old earl’s daughter who marries a vicar twice her age. They settle in Glanville (a town much like Eastbourne). She doesn’t do a lot of detecting, but her off-hand remarks and keen observations set the police on the right track to finding their culprit.

Lily Wu: Author Juanita Sheridan’s detective Lily Wu solves crimes in New York and Hawaii, and is most probably the first Asian female detective to be a principle character in fiction. Sheridan lived for many years in Hawaii and integrated herself into the diverse community, so wrote with authority as she created minority characters. Like Lady Lupin, Lily on shows up in four novels. Her “Watsonesque” sidekick is Janice Cameron who narrates the stories and gives the reader insight into Lily’s multi-faceted personality. 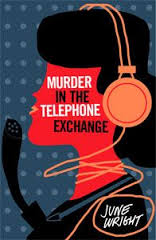 Maggie Bryne: Australian author June Wright created Maggie Bryne in the late 1940s, and only used  her in two novels. Born in Melbourne where June set most of her stories, she wrote her first, Murder in the Telephone Exchange, from experience, as she had been working in one for four years. June only published six books having to take a “regular job” when her husband became unable to work. In the first book, her protagonist, Maggie, is a single, career girl, and in the second, she is a married, stay-at-home mom. In both books, she is intelligent, sensitive, and sarcastic making her a realistic, complex character readers can fully enjoy.

Jeanie Halliday: Jeanie is only featured in one mystery written by Ianthe Jerrold (pen name Geraldine Bridgman). Ianthe was born into a family of writers. Her father, Walter, was a well-known author and journalist, and her grandfather was Victorian playwright, Douglas Jerrold. Published in 1940, Let Him Lie, is a traditional mystery set in a country home (a popular setting with many authors at this time.), and Jeanie is a fledgling amateur sleuth, learning as the story progresses. She is highly conversational, and uses that trait to interview witnesses, suspects, and anyone else who might help her solve the murder. Ianthe went on to write romantic fiction and psychological thrillers and left Miss Halliday behind.

Bertha Cool: Created by Erle Stanley Gardner while writing under the pen name A.A. Fair, Bertha is an overweight, penny-pinching widow who is a professional private investigator. As with all of Gardner’s characters, Bertha is not your everyday gumshoe. Alternately greedy, corrupt, dishonest, and offensive, she partners with attorney Donald Lam, and the two of them always get their man (or woman). The books are fast, fun reads filled with colorful characters, interesting plot twists, and in-depth plots. There are twenty-nine books in the series, with captivating titles such as Spill the Jackpot, Turn on the Heat, and Gold Comes in Bricks.

Have you ever heard of any of these unsung ladies?
Posted by Linda Matchett at 1:00 AM