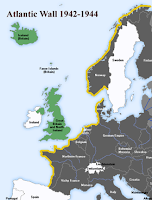 What comes to mind when you hear the phrase “The Atlantic Wall?” I imagined some sort of brick or concrete block structure similar to the Berlin Wall or Hadrian’s Wall. Perhaps even the Great Wall of China. Nope. That’s not it.

Turns out, the Atlantic Wall was an extensive system of fortifications and defenses created by the German Army along the coast of continental Europe and Scandinavia. Early in the war, Hitler anticipated an invasion by the Allies and set about to prevent their success. (The beaches of Normandy were part of this 1,670 mile “wall.”) 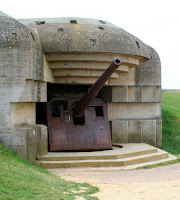 Nearly one million French were forced to build this collection of machine gun posts, emplacements, military installations, radar stations, mines, fortresses, and bunkers. It is reported that 1.2 million tons of steel (enough to make 20,000 tanks) and 17 cubic meters of concrete (the equivalent of 1,100 Yankee Stadiums) were used during the project. It cost 3.7 million Reichsmarks, equal to $306 billion in today’s money.

The Wall continues to create controversy in France. Some saw the Atlantic Wall as a sign of collaboration during the War. Many French construction companies got very rich out of building the Wall. Because these same companies were needed to help with reconstruction after the war, nothing was said, but others saw the abandoned defenses as a reminder of the occupation and couldn’t wait to tear them down. It wasn’t until decades later that the public began to preserve sections of the Wall, and these fortifications draw thousands of tourists.