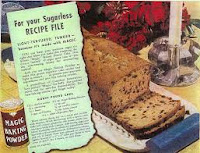 It was all about Victory during WWII. Victory gardens, Victory Youth Corps, and victory jobs. Advertisers were quick to use the phrase in their marketing materials in an effort to appeal to customers’ sense of patriotism. Many a recipe included “victory” in its title, and here’s just one version of a Victory Cake from The Modern Hostess Cook Book Patriotic Edition published in 1942. A housewife would have had to save her milk and sugar rations for this yummy dessert – it calls for a cup of sugar and a half pint of heavy cream. 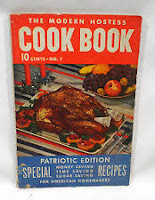