Known as one of the queens of crime, Margery Allingham wrote nearly fifty books in her career, most of which featured Albert Campion, the pseudonym for a prominent British aristocrat who becomes an "adventurer and a detective" in his mid 20s. Said to be a parody of Dorothy Sayer's Lord Wimsey, Campion starts out as a minor character in The Crime of Black Dudley published in 1929.

Both of her parents were writers, so it was only natural that Margery select that as her vocation. Her father was an editor and novelist, and her mother contributed stories to women's magazines. According to one source, she received her first fee when she was eight years old for a story she submitted to her aunt's magazine. 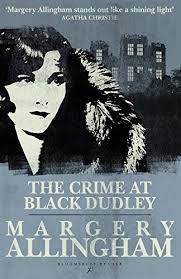 Margery continued to write for The Strand Magazine while her writing was gaining popularity.  Different than many of the other authors of The Golden Age of Detective Fiction, she included elements of romance and other secondary plot lines in her books. She is said to have considered the mystery novel as a "box with four sides: a killing, a mystery, an enquiry, and a conclusion with an element of satisfaction in it."

Two of Margery's best novels were written during WWII. The first, Traitor's Purse involves amnesia, The Tiger in the Smoke features an ex-commando and a search for treasure. What's not to love about that?
secrets, and treason woven together to create an intriguing, page-turning story.

Her writing is descriptive and her dialogue tight, creating characters and settings with few words. Timeless reads, her books are worth a trip to the library to pick up one or two or...