Thanks to a big “oops” on the part of the military, Vogue war correspondent Lee Miller scored her first major scoop in St. Malo, France.

Located on the English Channel coastline of northwestern France in Brittany, St. Malo is a walled port city that was founded in the first century by the Romans. Filled with medieval castles and Gothic cathedrals, the city was notorious throughout its history for being the home of French privateers and pirates. Often referred to as the brightest jewel on the Emerald Coast of Brittany, a cultural region that was once its own independent then duchy before united with the Kingdom of France, St. Malo is now a major tourist destination. 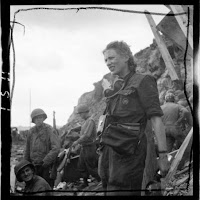 But in 1944, it was decimated by American shelling and bombing and British naval gunfire. Inaccurate intelligence reports indicated there were thousands of Axis troops and countless armaments within the city walls. According to an interview with St. Malo resident, Heloise, two citizens found their way to the American commander and informed him there were approximately seventy-five Germans in the city. More importantly, there were hundreds of civilians who could not get out because the Germans had locked the gates.

However, the report was not believed, and the assault began. After two full weeks of attack, only 182 of the original 865 buildings still stood. 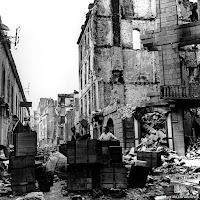 Women war correspondents were typically prohibited from the front line, and even if they received permission to go, very few military leaders would transport them into combat zones. However, Lee had been told the fighting was over, so she arrived in historical city only to find herself in the midst of the assault. Hiding in a German dugout under the ramparts, she escaped with her life to write about the “sordid ugly destruction they {the Germans} had conjured up in the once beautiful town.”

When she was discovered by the Allied commanders she was promptly arrested, but still managed to get her article submitted to Vogue. Filled with shocking photographs and copy, the piece was a gritty, realistic eyewitness to the war.

Have you ever heard of St. Malo?