Mystery Monday: Who was Carolyn Wells?

Mystery Monday: Who was Carolyn Wells?

A prolific writer who penned over 150 books, Carolyn Wells has faded into obscurity for most readers. Raised in Rahway, New Jersey by her wealthy parents, she remained single and living at home until she married at age 55. However, well before that, she worked for the Rahway Library Association and had great success writing children’s books and “nonsense books.” (Defined as a broad categorization of literature that balances elements that make sense with some that do not. Alice in Wonderland falls into this category.) 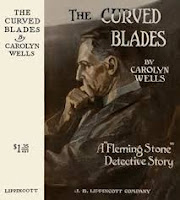 In 1918, she married William Houghton (of the publishing family), but unfortunately her husband died less than two years later. She remained in their apartment located in the posh Hotel des Artistes that overlooked Central Park for the rest of her life.

She wrote in multiple genres: children’s books, humor, nonsense, poetry, anthologies, mystery, and detective fiction. According to her autobiography The Rest of My Life published in 1937, when she heard Anna Katharine Green’s mystery The Affair Next Door she was “captivated by unraveling the puzzle” and from then on wrote only mystery novels. An interesting aside is that she had published the nonfiction The Technique of the Mystery Story nearly twenty-five years earlier.

In addition to her books, Carolyn also wrote for newspapers and magazines, the last of which, Flossie Frills Helps Out, being published after her death 1942.

Many of her books have been republished in paperback and ebook versions. With any luck, perhaps your local library has a copy or two.
Posted by Linda Matchett at 1:30 AM