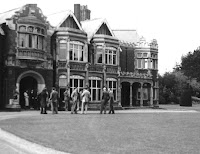 Winston Churchill once called Bletchley Park his “goose that laid the golden egg but never cackled.” Often referred to as Station X by those who worked there, Bletchley Park was a mansion located fifty miles outside of London. As the central codebreaking location of the Allies, the golden egg was the ability to decode the secrets of the German war machine, Enigma.

With 150 million million million (not a typo!) because of its lettered rotors, Hitler and his men were convince the machine was unbreakable. Enigma looked like an oversized typewriter with lights. Many experts feel the war was shorter by two to four years because of the Allies’ cracking of the code.

Ultimately, Bletchley would house more than 10,000 employees in a collection of small wooden huts who were a hodgepodge of personalities and skills. Many were mathematicians from Cambridge, but there those who were geniuses at chess, linguistics, and hieroglyphics. But one requirement was the same for all: they must be able to solve The Daily Telegraph’s crossword puzzle.

About 75% of the workforce was women, although few worked at the higher levels, instead operating cryptographic and communication machines, performing traffic analysis, translating Axis documents, and of course, doing clerical tasks. It was only after documents were declassified that the female analysts received recognition for their work.

Today, Bletchley Park is a heritage attraction and receives hundreds of thousands of visitors each year.