Welcome to the Story Sparks multi-Author Blog Tour.. Between May 21-26, 2018, readers get a chance to enter and win ebooks from six different authors Today, Jodie Wolfe is the featured author. Two lucky winers will be awarded either her To Claim Her Heart or Mrs Wigglesworth's Essential Guide to Proper Etiquette and Manners of Refined Society. Jodie will be talking about the Cherrokee Strip Land Run of 1893. Read on to discover what sparked Jodie's creativity and to enter the Rafflecopter (found at the end of the post) to win her heartwarming book.

September 16th will mark the 125th anniversary of the Cherokee Strip Land Run of 1893. It was our Nation’s last great race for land. 115,000 people showed up to race for 42,000 plots. I can clearly picture that day. It was hot and dry. Folks gathered along nine different starting places located along the Kansas border and south of the Cherokee Strip in Oklahoma Territory.

All manner of conveyances could be seen—people on foot, horseback, buggies, wagons, bicycles, trains, etc. I can easily imagine the clamor and chaos as all those assembled awaited the gunshot that would signify the start of the race at noon. People were desperate. The country had undergone an economic catastrophe with the plummet of the New York Stock Exchange due to the overinvesting in the railroads. Many businesses that depended upon the railroad were forced to close their doors. Quite a number of banks either closed or called in their loans. It was a difficult time.

Such is the backdrop for my new novel, To Claim Her Heart. This book is especially significant to me since it was my dear mother-in-law who introduced me to the history of the land run. It mattered to her because she had several relatives who completed in the land race and found claims. I vividly remember the summer of 1997 when we stopped off in Oklahoma to see one of those original properties. My sons and I tromped over the land and saw the homestead that was built in 1894. The first home had been a soddy that didn’t last longer than a year. 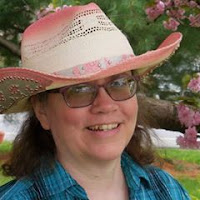 The rock home I saw was partially built into the side of a hill and in a state of disrepair. A stream gurgled nearby and within a couple of miles, the Gloss (Glass) Mountains cropped out of the landscape. It didn’t take much for me to start imagining characters tromping through the area and choosing to settle there.

While Mom never lived to see this book finally published, she knew that I was working on it in her last days. I’m so thankful that she shared her rich family history with me. Quite a few of the family stories she told me were included in my book.

Here’s what the back cover blurb says:
In 1893, on the eve of the great race for land, Benjamin David prays for God to guide him to his 'Promised Land. Finding property and preaching to the lost are his only ways of honoring his deceased fiancée. He hasn't counted on Elmer (Elsie) Smith claiming the same plot and refusing to leave. Not only is she a burr in his side, but she is full of the homesteading know-how he is sadly lacking.

Obtaining a claim in the Cherokee Strip Land Run is Elsie Smith's only hope for survival, and not just any plot, she has a specific one in mind. The land's not only a way to honor her pa and his life, but also to provide a livelihood for herself. She's willing to put in whatever it takes to get that piece of property, and Elsie's determined to keep it.

Her bitterness is what protects her, and she has no intentions of allowing that preacher to lay claim to her land . . . or her heart.

Bio:
Jodie Wolfe creates novels where hope and quirky meet. The power of story to influence lives and change hearts is what motivates her to weave tales that tell of the Savior's faithfulness and forgiveness. She's been a semi-finalist and finalist in various writing contests and is a member of ACFW and RWA. When not writing she enjoys spending time with her husband in Pennsylvania, reading, walking, and being a Grammie. Learn more at www.jodiewolfe.com.

Here’s the first scene:
Chapter One
Competition should be relegated to the male species. Proper young ladies should avoid a situation which permits rivalry, particularly involving the male species. If unavoidable, allow the gentleman to win. Be above reproach in this manner.
Mrs. Wigglesworth’s Essential Guide to Proper Etiquette and Manners of Refined Society

September 15, 1893, Kiowa, Kansas—Border of the Cherokee Strip
“Elmer Smith?”
For once in all of her days, Elsie welcomed the name Pa had insisted on when her life began and Ma’s had ended.
“Is that you, son?”
“Ain’t your son.” Ain’t no one’s son. Elsie shifted her Stetson lower to ward off the man’s scrutiny.
“There’s no need to get your prickles up. Do you testify you’re at least twenty-one years of age and head of your household?”
Elsie nodded and bit back a retort.
“Then sign here.” The man shoved a paper across the makeshift desk. Beads of moisture dotted his upper lip.
She scrawled her name on the line. The page crinkled when she folded and shoved it into her shirt pocket, along with the copy of The Homestead Laws and Pa’s hand-drawn map.
“Get out of the way, kid.” A scraggly looking fellow jabbed into her shoulder.
Elsie stepped out of line, glaring at him. He ignored her and turned his attention to the clerk.
She elbowed through a crowd of men. How had her small town swelled to so many folks? Thankfully there were few she recognized, or, more so, who could recognize her. The less who knew her gender, the better. She certainly didn’t need no man to help her get the land she and Pa had dreamed about.
Elsie scooted her hat up and swiped at the sweat on her forehead before dropping it back into place, scrunching the thick braid she’d pinned up three days prior. Hefting her saddlebags to her opposite shoulder, she hiked the short distance to the livery and retrieved Buster. A short ride would clear her head and prepare her for what lay ahead.
Dust swirled and nearly choked Elsie as she rode in the opposite direction of the throngs, to see the old farm one last time.
Acrid smoke filled her lungs. Nearby fires, to deter Sooners from entering the strip before the race began, burned in the west, but not out of control.
Elsie urged Buster, careful not to tire him. Everything hinged on finding the land tomorrow.
Everything.

At the beginning of each chapter I created advice from a Mrs. Wigglesworth. Of course, most of my characters do the complete opposite. :) Because I’ve had such positive feedback in regard to these sayings, I created an ebook of her quips. I’ll be giving away a copy of it as well as an ecopy of To Claim Her Heart, so be sure to leave a comment.

Link to Rafflecopter entry form: https://www.rafflecopter.com/rafl/display/831a42731/?
Posted by Linda Matchett at 1:30 AM