Home to Glacier National Park, Little Bighorn Battlefield National Monument, and Yellowstone National Park, Montana is a combination of mountain ranges, prairies terrain, and badlands. Located in the northwestern United States, it is bordered by Idaho, North and South Dakota, Wyoming, and three Canadian provinces. Despite being the third least populous state in the union, Montana made significant contributions to World War II.

War Dogs: Dogs for Defense was a program started by dog fanciers (mostly members of the AKC). The program asked US citizens to volunteer to give their dogs to the military for use as sentry dogs initially. Ultimately, dogs were also trained  and sent overseas to be used for mine detection, delivering messages, and scouting out the enemy. If you want more information about this interesting segment of US WWII history, watch my podcast about Dogs for Defense on YouTube.

Camp Rimini is now a ghost town just outside of Helena, but was once a training camp for sled and pack dogs during WWII. Journalist Karen Fischer states in her article: “Rimini’s long winters and deep snow...were also ideal for training men and dogs in Arctic rescue and survival techniques, so the camp became the source of the teams and equipment used by the Arctic Search and Rescue Units of the Air Transport Command.” 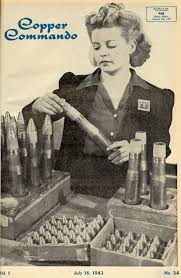 Mining:  The need for copper, zinc, manganese, and other minerals skyrocketed during the war and revived the Montana mining industry. The metals were used to produce materiels such as weapons, vehicles, and other tools. Robert I. Nesmith was the chief photograph of the "Copper Commando" newspaper during the war, and he took hundreds of picture in Montana that displayed the work of everyday miners.

Because of the labor shortage as men went off to war, mining companies struggled to find employees, and the federal government pressured them to hire nontraditional workers, including women. The move met with resistance. Union officials and copper workers argued that women could not work in mines or smelters because they lacked the physical strength and stamina to do the job. Women worked in a variety of positions from picking up debris to bending wire to oiling machinery. Many of the women expressed pride that they could hold their own doing "men's work." Ursula Jurcich recalled that smelter work "wasn't any more strenuous than housework."

Fort Missoula: Built in 1877 by the US Army to protect settlers in Western Montana from possible threats from Native Americans, the fort was remodeled between 1908 and 1914 before becoming a military training center during WWI. Nearly abandoned, it was taken over by the Civilian Conservation Corp in 1933 then handed to the Department of Naturalization and Immigration in 1941 for use as an Alien Detention Center. The 1,200 Italians house here were primarily merchant seamen, World's Fair employees, and the crew of an Italian luxury liner seized in the Panama Canal. About 1,000 Japanese-Americans and a few German-Americans were also interned at the fort.

Have you ever visited this majestic and historic state?
Posted by Linda Matchett at 1:30 AM