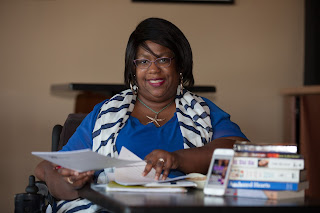 Linda:  Thanks for joining me today. Congratulations on the release of your latest novel Fatal Opposition. This is book three in the Parker family series. Did you set out to write a series, and where did you find your inspiration for this story?

Tracee: Thank YOU so much, Linda, for having me. Regarding my series, I wish I could say yes, yes, I had it all planned out but sadly nope, I didn't. I didn't set out to write a series. In fact I only recently consciously decided to do a series and do it right with a story bible readers may often hear writer's talk about.

I really try to write standalone's often. Honestly, in  my defense however, I think it can be better for me, at least, that I don't initially set out to write a series simply because I can be assured with some mind trickery that this story cannot have a cliffhanger. I personally hate those so I likely wouldn't do it anyway but if I tell myself that I'm NOT writing a series, it seems easier for me to wrap up all the loose ends. The other reason I don't plan or know that I'm writing a series is because some of my readers have told me that they want to hear "so and so's" story. I'm like, really? Mouth hanging open, dimpled brow, "You want him (or her)? I hadn't thought about him or her initially..." and then it begins, that character seems to pester me and as soon as I start thinking about him/her, they kind of breathe life and I get the story.

As far as Fatal Opposition, my inspiration for the story comes from the headlines often. I'm a news junkie and thus there is always something that I can use running with the story and my vivid imagination to create a beginning and an end. This story is about a football career gripping the rails of becoming great or a path that can also lead the hero, James Parker, awry. James is on the brink of being the leading QB on a team but he's dogged by his past, his biological family that he's looking for and digging could bring about shady characters he wishes he hadn't started looking for at all.

LM: The age old question for writers – are you a planner or a “pantser,” and what is your favorite part of the writing process?

Tracee: Definitely a pantser. In my eight books that I've written, I've  plotted only once. While I got to page 300 fairly quickly with that "plotting" try, the book has been sitting for almost five years and I haven't been back to it. So I think plotting hindered my ability to finish so I haven't plotted since. I will go back and finish the story and you would think it being so far along would entice me but sadly it doesn't.

My favorite part is probably the end. It's hardest for me to wrap up all the loose ends and actually WRITE the end (because I do fret about it being strong enough sometimes), but it is sheer joy to see the number of pages I've amassed and realizing again that God has given me all of this.

LM: Research plays a huge part in any book, and Fatal Opposition has several topics you probably had to investigate. How did you conduct your research, and was there anything unusual you found? 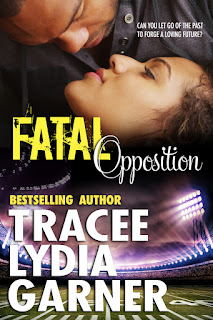 Tracee: I had to research about Football, I do like Football a lot, it's probably the only sport I really watch for the entire season, but I still didn't know a lot about it. I also had to research some mental health issues such as dementia and post-partum depression which James's mother has -which led or caused her to give him up as a baby. I mostly use internet and libraries, those are favorite go to sources. What's also wonderful now is the number of blogs that people have to share and gain support over what they're going through. I don't have children and so reading about birthing and some post-partum / mental health accounts added unique perspective and ideas that you don't get from national medical journals however respected, endorsed and accurate they are, they tell more of the clinicians approach for other doctors obviously rather than what someone really experiences. As writing and the internet has evolved, that's an exciting platform to add to ones research toolbox.

LM: You’ve been writing for a while. How did you get started as a writer, and how did you decide to seek publication?

Tracee: I really wrote out of depression. I should say I asked God in my depression over poor grades in school to help me, and my exact words were: "give me something else in case this whole school thing don't work out". School was not easy for me, UNTIL I started writing. Once I felt I found something I was good at, I received recognition through winning a contest, I started getting A's and B's in school when I had been more of a "C-average" type of student. God really supplied, I entered my first novella I'd ever written into a national contest, won it and part of the wins were a trip to NYC to get an award at the luncheon, a 500 dollar advance and publication in the book with the three finalist. It was awesome and I simply kept going, kept writing and here I am now.

LM: You live in my old stomping grounds, the Washington, DC area. What is your favorite thing about living there?

Tracee: I love that DC has all of the amenities you like without traveling far. I also feel we're some of the most progressive. I have a disability and every time I think about moving further south for the warmth, I feel like as far as my disability goes, (California would be the best place) I'd be hard pressed to feel as if I didn't travel a bit backwards and really have to rebuild the network of support I have here. Attitudes, acceptance, provision and access are really what keep me in the area and the Kennedy Center and every other live stage I frequent helps too. I love live theatre and hope to have a full length play some day. The Motown story will be at Wolf Trap this summer and it will be my third time seeing it.

LM: Okay, here are some quickies:

LM: If you were to cast any actor (living or dead) to play your two main characters in Fatal Opposition, who would you select?

I'd actually love an actual football player to play the part of James, either Russell Wilson from the Seattle Seahawks or Jordan Reed a tight end from the Washington Redskins (who the team is loosely based off in Fatal Opposition) only in my book they're the Washington Rebels of course. LOL

The heroine could be played by Nia Long who I have watched for quite some time, since she was on my favorite soap opera Guiding Light more than twenty years ago. She seems nice and happens to be petite much like Cashell, the character and of course, she's just beautiful too. Nia Long, for any crime scene show fans, has recently got a recurring role on NCIS Los Angeles.

Tracee: Later this year, I'm planning to release the start of a new series about the Jameson Family, with four siblings each with their own book. Two of those in the series are reissues, released in my early twenties my second and third book in my career. Now the rights have been reverted back to me from my publisher. I'm finishing the second half of the series, thus two in the series will be new offerings but everything is new to someone. The first in the series, Whatever May Come, is about the youngest daughter, Tisha Jameson who moves to a small town in order to escape her overbearing family and a scandal that rocked the school where she taught kindergarteners.

Thanks so much for the opportunity, Linda!