Among the cotton fields and farmland of Gilbert, Arizona in the early years of the Great Depression, Mr. and Mrs. Bailey live a simple, but happy life with their five daughters on a cotton farm. When the wealthy Richard Buchanan moves to town, bringing his family, a friend, and a desire to learn about cotton, Matilda Bailey is convinced that he is the perfect candidate to marry her eldest daughter, Alice. Richard is cheerful, friendly, and likable. His friend Sidney Dennison doesn’t make such a good impression. Eloise Bailey decides he’s arrogant and self-conceited, but when Raymond Wolfe comes to town, accusing Sidney of dishonorable and treacherous conduct, Eloise is angered at the injustice of the situation. When the Buchanan household leaves town, Alice must turn to the Lord and face, perhaps, her most difficult test in trust, while Eloise takes a trip to visit her friend and may well discover a web of deceit that she doesn’t really want to believe exists.

I enjoy “retelling” books and thought the premise of Presumption and Partiality (love the title) being set during the Great Depression was interesting and unique. The author kept very close to the original Pride and Prejudice plot points, which gave the book credibility, but I was disappointed at some of the execution of the story. In the beginning I struggled to keep up with which character in the retelling was supposed to be which character in the original, but it got easier as the story progressed. The writing style and dialogue felt more like the Georgian/Regency era than the American 1930s, and I had trouble feeling the Depression era. The occasional references to Sidney’s Navajo heritage felt more like an aside than an integral part of the story. I would have liked to have seen this aspect developed more fully. Eloise’s mother was closely aligned with Austen’s original character, but I would have preferred the use of fewer exclamation points in her dialogue. I liked how the Collin’s character was portrayed, and also Eloise’s and Jane’s work with the poor and needy. It gave them extra depth and introduced an opportunity to explore Christian service. The other characters were also true to the original which I liked. The situation with the “Lydia” character had a creative slant to it, and the subject matter handled with sensitivity.

I received a copy of this book for free from CelebrateLit Publicity, and a favorable review was not required. All opinions expressed are my own. 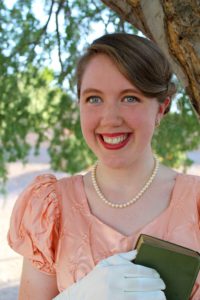 Rebekah Jones is first and foremost a follower of the Living God. She started writing as a little girl, seeking to glorify her King with her books and stories. Her goal is to write Bible-Centered, Christian Literature; books rich with interesting characters, intricate story lines, and always with the Word of God at the center. Besides writing, she is an avid reader, songwriter, pianist, singer, artist, and history student. She also loves children. She lives with her family in the Southwestern desert.

Why is he a Navajo?

I’ve had more than one person ask me why I chose to make Sidney Dennison, the “Mr. Darcy” of my novel Presumption and Partiality, a Navajo Indian.

When I commenced planning and research for placing a retelling of Pride and Prejudice in the 1930’s United States, I found myself drawn to the desert of Arizona rather early on. Specifically, the tiny farm town of Gilbert. I knew, however, that few rich people lived in that area; certainly not enough to create social rifts large enough to recreate the social differences of the original novel.

I experimented in my head with a few different ideas, but the idea of Sidney as a Native American came to me one day and just clicked. I knew that I couldn’t fully pull off a Navajo who lived on the reservations. As much as I researched, I couldn’t quite get the feel. Yet, a man whose ancestry included a white man as a grandfather, who lived outside the reservations, though with relatives who clung to some of the old traditions, I thought I could do.

I used to wish I were an Indian, in part because I wanted to have great tracking skills, live in a tee-pee, possess superb bow and arrow abilities, and I wanted to ride a horse. True, most of that did not enter a 1930’s novel, despite my Navajo cowboy, because the eras are different. Though, Sidney did get a horse. Or technically, several.

Further, something about the silent, good-looking Indian appealed to me, much as I tend to shy away from writing about handsome and beautiful people, since they feel so common in fiction. The minute I began imagining the man with his Navajo ancestry, he just felt perfect.

By the end, Sidney turned out to be one of my favorite characters. (I can’t ever pick just one in my novels.) I think I made a good choice and I hope my readers will agree!

April 29: Mary Hake
April 30: Proud to be an Autism Mom
April 30: A Greater Yes
April 30: Fiction Aficionado
May 1: Among the Reads
May 1: Debbie's Dusty Deliberations
May 2: Janice's Book Reviews
May 2: Jeanette's Thoughts
May 3: Carpe Diem
May 3: A Baker's Perspective
May 4: Kaylee's Kind of Writes
May 4: With a Joyful Noise
May 4: Have a Wonderful Day
May 5: Pause for Tales
May 5: Simple Harvest Reads
May 6: Pursuing Stacie
May 6: Big Reader Site
May 7: Faery Tales are Real
May 7: By the Book
May 7: Reader's Cozy Corner

To celebrate her tour, Rebekah is giving away a grand prize of the complete set of the Vintage Jane Austen Collection!!
Click below to enter. Be sure to comment on this post before you enter to claim 9 extra entries! https://promosimple.com/ps/cc8f
Posted by Linda Matchett at 1:30 AM