After the tragic death of her husband, Aven Norgaard is beckoned to give up her life in Norway to become a housekeeper in the rugged hills of Nineteenth-Century Appalachia. Upon arrival, she finds herself in the home of her late husband’s cousins—three brothers who make a living by brewing hard cider on their three-hundred acre farm. Yet even as a stranger in a foreign land, Aven has hope to build a new life in this tight-knit family. But her unassuming beauty disrupts the bond between the brothers. The youngest two both desire her hand, and Aven is caught in the middle, unsure where—and whether—to offer her affection. While Haakon is bold and passionate, it is Thor who casts the greatest spell upon her. Though Deaf, mute, and dependent on hard drink to cope with his silent pain, Thor possesses a sobering strength. As autumn ushers in the apple harvest, the rift between Thor and Haakon deepens and Aven faces a choice that risks hearts. Will two brothers’ longing for her quiet spirit tear apart a family? Can she find a tender belonging in this remote, rugged, and unfamiliar world? A haunting tale of struggle and redemption, Sons of Blackbird Mountain is a portrait of grace in a world where the broken may find new life through the healing mercy of love.

Sons of Blackbird Mountain is a gripping novel about the complex relationships among family and community members. Yes, the book is a romance story, but it is much more than that. Serious issues such as racism, domestic violence, and segregation are explored and addressed with sensitivity and realism, making the story difficult to read at times. Each character has his or her own demons to fight, often resulting in tension with other characters or within themselves. Especially moving is Thor whose deafness and addiction to alcohol impacts his brothers and himself. The descriptions are vivid, effectively immersing me in 19th century Appalachia. Strong dialog enabled me to feel the characters’ emotions as strongly as if they were mine. Ms. Bischof did an excellent job of conveying Thor’s deafness and his ability to lip read and use American Sign Language. Themes of forgiveness, mercy, and salvation are woven throughout the story without being preachy. As with all of Ms. Bischof’s books, I will read this one over and over. Highly recommended.

JOANNE BISCHOF is an ACFW Carol Award and ECPA Christy Award-winning author. She writes deeply layered fiction that tugs at the heartstrings. She was honored to receive the San Diego Christian Writers Guild Novel of the Year Award in 2014 and in 2015 was named Author of the Year by the Mount Hermon conference. Joanne’s 2016 novel, The Lady and the Lionheart, received an extraordinary 5 Star TOP PICK! from RT Book Reviews, among other critical acclaim. She lives in the mountains of Southern California with her three children. Visit her online at JoanneBischof.com, Facebook: Author, JoanneBischof, Instagram: @JoanneBischof. 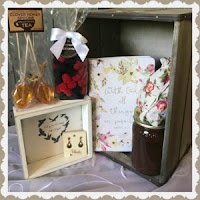 To celebrate her tour, Joanne is giving away
Grand prize of a country crate, a jar of apple butter, a bag of gummy berries, journal, bath salts, honey spoons, copper earrings, and a blackbird sign!!

Click below to enter. https://promosimple.com/ps/d140/sons-of-blackbird-mountain-celebration-tour-giveaway
Posted by Linda Matchett at 1:30 AM