“I’m glad there’s some folks getting’ interested in the old ways. This new generation don’t know such things, but when they find the old songs and the tales, they’ll delight in them.” Granny in Grandfather Tales by Richard Chase

The women of Appalachia stood tall beside their husbands. Whether it was felling trees to build cabins or defending their homeplaces from marauding Indians, their everyday lives were severe. In the 1700’s, survival was one of endurance. For these mountain women, it was endless toil-that sun up to sun down kind.

When the Scots-Irish emigrated to our country, they settled in the Appalachian hills and hollers. The mountainous landscape reminded them of home, and many gravitated to those small valleys between two mountains or hills.  Since most families traveled with their kin, they also planted crops together, raised cabins, barns, and children together, sewed in quilting bees together, and even worked stills together. “Feelin’ poorly” was not an excuse for not getting the work done, even if a woman was “wore slap dab out,” and there was always work. “Lollygagging” (dawdling) was not tolerated either.

Since neighbors weren’t within hollering distance, it was a solitary life. Music was a solace, as the sounds of a dulcimer, fiddle, or dobro pushed the wilderness walls away. From Germany, Scotland, and Ireland, 18th century immigrants brought their ballads with them. This oral tradition finally was written down, though some songs were lost. Both the lyrics and tunes were plaintive, and mostly told of sadness and loss. “Barbara Allen” was a popular one.

Oh, mother mother make my bed
Make it long and make it narrow
Sweet William died for me today
I'll die for him tomorrow

In Scarlet town where I was born
There was a fair maid dwelling
And every youth cried well away
For her name was Barbara Allen.


Radio programs in the 1930’s, like the Grand Ole’ Opry, helped to keep this music alive.

Being independent was important, and children were taught the skills needed for this rural life. All family members had their chores to help the family survive. As President Eisenhower said about America’s fight in WW II, “Our pleasures were simple-they included survival.”


Have you read Christy by Catherine Marshall?

This is an honest portrayal of Appalachian life in Cutter Gap, Tennessee in the 1900’s. During this early 20th century, there had been little change from the 1700’s, especially when it came to faith, family values, and mountain traditions. This primitive life in the holler was not very different from when Mary Ingles lived in the neighboring state of Virginia.

During the French and Indian War, the Shawnee Indians attacked and captured families at a settlement called Drapers Meadows in Virginia. Mary Ingles and her two sons, four-year-old Tommy and George, age two were captured, along with others. It was July, 1731, and all three survived a forced March to Ohio. Her sons were adopted into the tribe, and she was given to a French trader. In October, she and another woman planned their escape, taking two blankets and a tomahawk. Living off the land, Mary traveled 800 miles in forty days to reach home. Naked, skeletal, and white-haired, she arrived with the will to start life again.

Here is a map of the trail she followed.

The Appalachian women of Mary’s time had indescribable strength. I believe it was a life more than can be born. The more I read about the Appalachian hill life, see the photos of it, and remember the stories of privation and doing with what they had, there was a factor of impossibility there. It was a “can do” attitude based on faith, and it was bigger than they were. She literally fought with all her being to get home; hope pushed her.

Minnie Ethelene Hefner Justus stood a mere 5 feet 3 inches, but she was a tall as a tree in my eyes. Here skin was weathered by years of working; her eyes were water-blue, and her hands tough. Her back was hunched from constant work. Whatever the task was, Granny did the next thing. I remember her remonstrating my cousin with a "I'm going to snatch you bald-headed."

Born October 14, 1877, my great grandmother was a dear. Her smile lit up her face, and her just-because hugs were coveted by her grands and great grands. She was the one who gave me slices of lemon to rid my stomach of the upheavals caused by mountain curves on the way to her house.

She could wring the neck of a chicken in the back yard and have it fried and on the table an hour later. Her wringer washing machine sat on her back porch, leaning toward the yard, and in the living room her pump organ greeted her guests. Until she was ninety, she tended her own garden, put up the vegetables, and baked biscuits that would melt in the mouth. Living through the Depression, she and Pop lost all they had, so she opened a boarding house in Laurel Cliff. Seeing to her eight children and as many boarders, Granny had busy days. 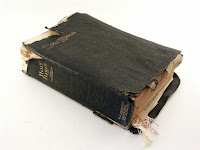 She was a woman of the mountains who made her way on Sundays to Pleasant Hill Baptist Church to worship each week until she moved into a nursing home. Her Bible was well worn, and her actions to family and friends proved it lived deep in her heart. No one left her home empty-handed or without knowing they were important to her.

In researching Appalachia and its families for my latest book, Tales of a Cosmic Possum, I was fascinated by the sayings. Since I chose to write it in dialect, many are included. Memories of Granny using so many of them made me smile, and I reckon that I might as well admit, my speech is sprinkled with them, too!