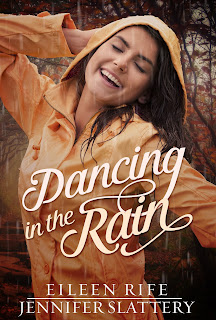 Michael Ackerman is one of the protagonist's in Jennifer Slattery's novel Dancing in the Rain. Pull up a chair and get to know this fascinating character:


Michael looks around nervously, adjusts his Stetson. Wonders if he should take it off, for manner’s sake. Though his mugshot had been filled the local news years ago, he’d never willingly embraced the media.

But to grant a one-on-one interview, an exclusive? Maybe this was a bad idea.

The green room door crashes open and Tressa, the talk show host, enters wearing a peachy summer dress with teal jewelry and heals. “Michael!” She approaches him with an outstretched hand. “So glad to have you on the set. We’ll start in …” She checks her watch then glanced around the green room. “Exactly two minutes and thirty-five seconds. You ready to wow the ladies with that dashing smile of yours?”

“Relax.” Tressa looped her arm through his. “You’ll do great.” She tugged him out the door and onto the set. “Just answer the questions. And remember, be real. Don’t stifle your emotions. The more drama, the better. Viewers eat it up.”

Michael stiffens. “Like I told you when I accepted this interview, my goal’s to defuse drama, Ms. Reynolds. Not feed it.”

She flashes a smile, motions to one of two plush leather chairs then sits in the other one. She hands him a steaming mug of coffee with the show’s logo printed on it. “In case you need something to do with your hands. Plus, it’ll make our conversation appear more relaxed.”

He sat and shot a glance toward the live audience. Had to be at least two hundred folks, mostly women. Probably half of which were waiting to hear him flub things. God willing, some of them were longtime camp supporters who came to hear his side.

He wanted to give them that, but knowing his luck, he’d get his words all twisted, make things worse. Camp Hope couldn’t afford that. If they lost their donors, the ministry would go under. Staff would be laid off.

Before Michael could catch his breath or gather his thoughts, they were on.

“What do you say we cut to the chase, Michael?” Tressa scooted to the edge of her seat and shifted so that she partially faced him and the camera. “You’ve seen the pictures that have surfaced, and I’m sure you’ve heard what people are saying.”

“And your past. Did Camp Hope’s board of directors know about your record—your struggles with alcohol—when they hired you?”

“I didn’t hide anything. Not then or now. And I don’t drink.”

He swallowed. “That one night.”

“A temporary laps of judgment, then?”

“I guess you could call it that.” Stupidity born in a burst of rage at watching his dad beat his mom one too many times.

“Let’s talk about Martha. She came in on scholarship, correct?”

He nodded and rubbed his thumb knuckle.

“You checked out her family history?”

“Were any of your staff trained in dealing with kids with trauma?”

“Our staff are well trained. But more than that, they’ve got a heart for those kids. They love them like Jesus would.”

“It’s got to be. It’s the driving force for everything we do.” Everything he was. Had become. He wasn’t that enraged felon anymore. Christ had grabbed a hold of him, made him new. Whether this talk show host and all her scandal-loving viewers cared to see that or not.

“Tell me about Loni.”

He frowned. “What about her?”

This wasn’t about her. It was one thing for the media to hound him. He could take it. Probably even deserved it. But he wouldn’t let them turn on Loni or make this about her blindness.

“Have you ever attended a church camp, Ms. Reynolds?” If he threw questions at her, kept her talking, maybe he could direct the conversation onto all the good Camp Hope had done over the years, all the lives transformed.

And away from Martha and Loni.

“I can’t say that I have. Your counselors—how do you select them?” She glanced at the cameraman then straightened with a beauty pageant smile. “We’re going to take a short break to hear from our sponsors. We’ll pick up this conversation when we get back.”

No, they wouldn’t. Obviously Tressa was looking to profit from a scandal, regardless of whose life and ministry she destroyed. Had he really expected any different?

He stood. “Listen, I’d love to—” No sense lying to the woman. “If you need anything else, I suggest you connect with our public relations department.”

Murmurs rippled through the audience, and Tressa immediately started back peddling.

Michael quickened his step, and with a quick nod to the cameraman, Michael left.

Whoever said all publicity was good publicity had clearly never been to prison nor had anyone try to entangle their story with the death of a troubled teen.

Dancing in the Rain:
On the verge of college graduation, Loni Parker seeks employment as a music teacher, but no one will hire her since she's blind. Or so she thinks. To take her mind off her troubles, her roommate invites her to spring retreat at Camp Hope in the gorgeous North Carolina mountains.

Unbeknownst to Loni, Michael Ackerman, the director, is an ex-con responsible for the accident that caused her blindness. When Loni warms up to camp and wants to return as a summer counselor, Michael opposes the idea, which only makes Loni want to prove herself all the more. Though she doesn't expect to fall for the guy. Still, her need for independence and dream of teaching win out, taking her far away from her beloved Camp Hope...and a certain director.

Camp director Michael Ackerman recognizes Loni instatnly and wants to avoid her at all costs. Yet, despite the guilt pushing him from her, a growing attraction draws him to the determined woman. She sees more with her heart than the average person does with his eyes. But her presence also dredges up a long-buried anger toward his alcoholic father that he'd just as soon keep hidden. When circumstances spin out of control, Michael is forced to face a past that may destroy his present. 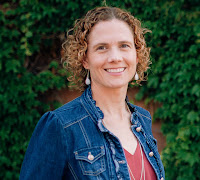 Jennifer Slattery Bio: Jennifer Slattery is a writer and international speaker who's addressed http://jenniferslatterylivesoutloud.com. She has a passion for helping women discover, embrace, and live out who they are in Christ. As the found of Wholly Loved Ministries (http://whollyloved.com) she and her team partner with churches to facilitate events designed to help women rest in their true worth and live with maximum impact. When not writing, reading, or editing, Jennifer loves going on mall dates with her adult daughter and coffee dates with her hilariously fun husband. Connect with her on Facebook (https://www.facebook.com/JenSlatte) or Instagram (https://www.instagram.com/slatteryjennifer/).
women's groups, church groups, Bible studies, and other writers across the nation. She's the author of six contemporary novels, maintains a devotional blog found at
Posted by Linda Matchett at 1:30 AM