As most of you know, I love movies from the 1930s and 1940s. Fortunately, many of them are available so I can watch to my heart's content. I did a significant amount of research about the USO for my upcoming release, Murder of Convenience and found quite a bit of information about Bob Hope and his association with this wonderful organization. As a result, I decided to binge-watch some of Bob's earlier/lesser-known films.

Teaming Bob with actress Paulette Goddard, The Ghost Breakers was released in 1940. The movie is an adaptation of a 1909 play called The Ghost Breaker. The film was remade in 1953 as Scared Stiff starring Dean Martin and Jerry Lewis. Hope made a cameo appearance. Despite being billed as a horror-comedy and featuring voodoo, zombies, and lots of fog, the 1940 movie comes off as a cozy mystery sprinkled with one-liners.

The plot is simple: Mary Carter (Goddard) inherits a castle in Cuba, but is warned to get rid of it because "the ghost will kill her" if she visits. Lawrence Lawrence (Hope), whose name is an opportunity for more than one jibe ("My folks had no imagination"), ends up linked to Mary through a series of mishaps including the murder of Ramon Maderos. Lawrence wonders "if a man can go to jail for accidentally killing a stranger." As anticipated, Mary travels to Havana and Lawrence tags along to keep from being arrested. Twists and turns abound as the pair try to determine if the ghost is real and who is trying to keep Mary from staying and claiming the castle. 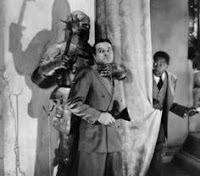 As it turns out, The Ghost Breakers has more than one villain, and the ending arrives with a bang. I had a great time trying to solve the mystery and only got it half right.