Twice the size of Ireland, and half against the size of England, the state of Nebraska encompasses the prairies of the Great Plains, the towering dunes of the Sandhills, and the rock formations of its panhandle. In 1867 Nebraska became the 37th state and given its anglicized name from an Otoe (Native American) word meaning “flat water.”

Nebraska’s distance from both U.S. coasts, and its vast expanse of unpopulated land made it an ideal location for defense manufacturing facilities. The state was a major producer of aircraft and munitions as well as other war materiel. The largest manufacturer in Nebraska was the Cornhusker Ordnance Plant located west of Grand Island. The facility manufactured 90-, 220-, 260-, 1,000-, and 2,000-pound bombs and employed over four thousand workers at its peak. The company was so large, a small town sprang up around the plant to accommodate the employees. The plant ultimately grew to include 645 buildings with fifteen miles of electric distribution lines and twelve miles of sewer lines. 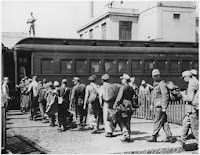 Twenty-three prisoner-of-war camps dotted the landscape and primarily housed Italians and Germans taken during North African campaigns. The main camps were located in Scotts Bluff, Atlanta, and Fort Robinson, housing more than 12,000 prisoners. Inmates were used to fill jobs, especially those in the agricultural industry.

Military bases were also numerous in the state, training thousands of soldiers, pilots, and air crew. Located in the North Platte train depot, the North Platte Canteen provided food, magazines, and entertainment to over 3,000 soldiers every day.

Fort Robinson was home to the War Dog Training Center. A sprawling kennel area housed more than 1,300 canines who were trained as guard, scout, messenger, and sled dogs. Training last eight to twelve weeks (depending on how quickly the dog learned), and accounted for more than half of the 10,000 dogs used by the Army.

As with other states, civilians got involved with rationing, scrap drives, bond rallies, and volunteering in one of the many relief or support organizations.

Despite his best efforts to remain aloof to Rochelle, Irwin is drawn to the enigmatic and beautiful young woman, but will time run out before his wounded heart can find room for her?
Inspired by the biblical love story of Rebekkah and Isaac, Love’s Allegiance explores the struggles and sacrifices of those whose beliefs were at odds with a world at war.