Cessation of hostilities during the “war to end all wars” went into effect at the eleventh hour of the eleventh day of the eleventh month of 1918, with the armistice being signed in June of the following year. In November, President Wilson proclaimed the first commemoration of Armistice Day. The day was celebrated with parades and public meetings as well as a brief suspension of business beginning at 11:00 AM.
In 1926, Congress passed a resolution to make Armistice Day an annual observance:
“Whereas the 11th of November 1918, marked the cessation of the most destructive, sanguinary, and far reaching war in human annals and the resumption by the people of the United States of peaceful relations with other nations, which we hope may never again be severed, and
Whereas it is fitting that a recurring anniversary of this date should be commemorated with thanksgiving and prayer and exercises designed to perpetuate peace through good will and mutual understanding between nations; and
Whereas the legislatures of twenty-seven of our States have already declared November 11 to be a 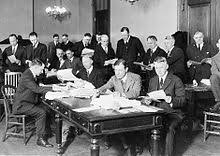 legal holiday: Therefore be it Resolved by the Senate (the House of Representatives concurring) that the President of the United States is requested to issue a proclamation calling upon the officials to display the flag of the United States on all Government buildings on November 11 and inviting the people of the United States to observe the day in schools and churches, or other suitable places, with appropriate ceremonies of friendly relations with all other peoples.”
November 11 became a national holiday in 1938, primarily set aside to honor veterans of WWI. However, after World War II and the Korean War, Congress amended the Act of 1938 in 1954 by changing the word Armistice to Veterans. With the approval of the legislation, November 11 became a day to honor American veterans of all wars. Unlike Memorial Day, Veterans Day pays tribute to all American veterans, living or dead, but especially gives thanks to living veterans who serve or served their country honorably during war or peacetime.
The Uniform Holiday Bill of 1968 intended to create three-day weekends for Federal employees by moving four national holidays to Mondays: Washington’s Birthday, Memorial Day, Veterans Day, and Columbus Day. The concept was to encourage travel, recreational, and cultural activities and stimulate industrial and commercial production. Many states didn’t agree with the decision and continued to celebrate the holidays on the original dates.

Recognizing the historic and patriotic significance of commemorating Veterans Day, President Ford signed a law in 1975 that returned the annual observance of Veterans Day to its original date of November 11, with the act going into effect in 1978.
___________________
Spies & Sweethearts

A secret mission. A fake bride. A run for their lives.
According to the OSS training manual, the life expectancy of a radio operator in Nazi-occupied France is six weeks. Partnered with one of the agency’s top spies, Gerard Lucas, newly-minted agent Emily Strealer plans to beat those odds. Then their cover is blown and all bets are off. The border to neutral Switzerland is three hundred miles away—a long way to run with SS soldiers on their heels. Will Emily and Gerard survive the journey? And what about their hearts?
Nothing in the manual prepared them for falling in love.
Purchase Link: https://amzn.to/32nLh9h
Posted by Linda Matchett at 1:30 AM