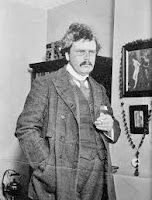 Have you ever devoured a series of books by an author only to discover you’ve reached the end of the line? That the author has either retired or passed away and no more stories would be forthcoming?

That happened to me quite a few years ago with G.K. Chesterton’s Father Brown series. I was making my way through Golden Age detective fiction when I stumbled on his short stories. I was devastated when I learned he’d been long gone by the time I started reading his works. (Yes, John Peterson has written over forty additional Father Brown stories, and as good as they are, they’re not the same.

Vastly different from Graham Greene, Dashiell Hammett, S.S. Van Dine, and Raymond Chandler, Chesterton was a prolific writer. He penned around eighty books, several hundred poems, more than two hundred short stories, four thousand essays, and several plays. Long before he began to delve into fiction, he was a columnist for a variety of publications including his own G.K.’s Weekly. He even wrote articles for the Encyclopaedia Britannica.

Chesterton was born on May 29, 1874 in Kensington, London and baptized into the Church of

England, even though his family was Unitarian. Somewhere during his youth, he and his brother became interested in the occult and dabbled with Ouija boards. He credits his wife Frances with leading him back to Anglicanism after their marriage in 1901. By 1922, he’d converted to Catholicism.

The first Father Brown story, The Blue Cross, was published in 1910. Described as a short, stumpy Roman Catholic priest, “with shapeless clothes, a large umbrella, and an uncanny insight into human evil,” the good father is loosely based on the Rt. Rev. Msgr. John O’Connor, a parish priest who was involved in the author’s conversion. Father Brown is often assisted by the reformed criminal M. Hercule Flambeau.

Rather than deductive like Sherlock Holmes, Father Brown tends to solve the crimes with intuition, saying in The Secret of Father Brown, “You see, I had murdered them all myself...I had planned out each of the crimes very carefully. I had thought out exactly how a thing like that could be done, and in what style or state of. Mind a man could really do it. And when I was quite sure that I felt exactly like the murderer myself, of course I knew who he was.” After nabbing the killer, he would then wander off to exercise his priestly role.

Father Brown has appeared in film, including two German adaptations, radio, and television, the most recent of which ran from 2012 to 2019 and starred Mark Williams.

Are you a fan?