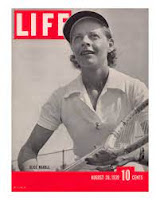 How does one go from being the winner of eighteen Grand Slam tennis championships to an editor for DC Comics to a spy running, or rather driving, for her life?

Life for Alice Irene Marble began on September 28, 1913 in Beckwourth, California as the fourth of five children to a high climber lumberjack and his wife, a former nurse. When she was five years old, the family moved to San Francisco where her father passed away two years later. As a result, her older brothers left school to find jobs.

She did well in academics, but where she really excelled was athletics, and eventually played seven sports in high school, including basketball and baseball. Preferring that she pick up a more “ladylike” sport, her brother Dan gave her a tennis racket. At first, she had little use for the game, but within a short time fell in love with it, going on to win local then several California junior tournaments. By the time she was twenty-three, she’d won the singles title at the U.S. Championships as well as the mixed doubles title with Gene Mako. For the next four years she’d win every match she played. In 1940, she went professional and earned the equivalent of $2 million.

leaders. In 1941, she met publisher Max Gaines at a cocktail party where he proposed a new character for his All American Comics universe – Wonder Woman. Would Alice be willing to endorse the effort? She agreed with the caveat that he include stories about real female heroes from history such as Clara Barton, Dolly Madison, and Eleanor Roosevelt. By the end of the evening, she was an associate editor with the company.

Within a year, she was chafing at the bit. She wasn’t making a difference. In her mind, she wasn’t sacrificing anything or giving enough. A few months before, she’d received a tuberculosis diagnosis which meant she couldn’t enlist. She spoke to youth groups encouraging them get involved and entertained the troops at military bases, but she still felt a void.

Then in 1942 she met Captain Joe Crowley. The handsome pilot spoke five languages and worked for Army intelligence. After a whirlwind romance, the two married, but then the dreaded telegram came eighteen months later informing her that he’d been killed in action after being shot down over Germany. Depression settled over her, and she attempted to kill herself. When friend and widower of Carole Lombard, Clark Gable heard what happened, he sent a card saying “If I can do it, so can you.” 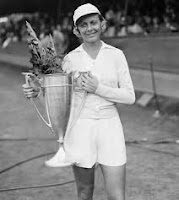 While in recovery, Colonel Linden of Army intelligence showed up. Would she be willing to play a tennis exhibition in Switzerland, and by the way, also renew acquaintance with an old boyfriend so they could learn about his Nazi connections and investors. With nothing to lose, she said yes and was soon headed over the ocean. “Hans,” whose real name was never released, welcomed her with open arms, and she was able to infiltrate her way into his life. One night while collecting evidence, her cover was blown, and she raced out the door, a Nazi agent on her heels. She jumped into Hans’s Mercedes and barreled down the road. The German followed her in his own vehicle and eventually caught up with her. She tried to flee on foot, was shot in the back, and left for dead. Sometime later, she woke up in a hospital, the evidence gone. But at least she was alive. And she would go on to live another forty-five years.

Purchase Link: https://amzn.to/3RSujHe
Posted by Linda Matchett at 1:30 AM