Ever since there have been wars, there have been war brides. World War II was no different. One source I found indicates that between 1942 and 1952, approximately one million American soldiers married foreign women from fifty different countries. About 100,000 brides were British with another 150-200,000 from continental Europe. Somewhere between 50,000 and 100,000 servicemen married women from the Far East and Germany. Remember these numbers are just American troops!

Why were these women willing to marry and leave the country of their birth? Some would say proximity—the “Yanks” were available. Native men were not. Others might say it was the generosity exhibited by American soldiers. To the women of war-torn countries where deprivation and the struggle to survive were a way of life, the food, personal items such as stockings, and money, offered by the Americans had to be tantalizing. Perhaps these women simply want to raise their children without the threat of war.

In anticipation of this issue, soldiers, sailors, and airmen were issued a 38-page handbook instructing them on how to handle being guests in various countries (whether it was ally or foe). The rules encouraged friendliness, but discouraged “special relationships.” An article in Yank Magazine touted “Don’t Promise Her Anything – Marriage Outside the U.S. is Out.”

The story’s title may not have been officially correct, but the process for American servicemen to marry foreign wives was a complex requirement that included up to fifteen forms, and it could take up to a year before permission was granted or denied. A regulation from the War Department required overseas troops to obtain permission to wed, on the threat of court-martial.

Until Congress passed the War Brides Act in 1945, these women were part of the limited number of immigrant aliens allowed to enter the U.S. each year, potentially leaving them stuck in their home countries for months or years. Six months later, Congress enacted the Fiancées Act which granted fiancées of servicemen three-month visas as temporary visitors. If the couple didn’t marry during the ninety days, the fiancée would be returned home. 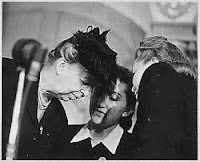 The women were eligible for free transport to the U.S. via former troop or hospital ships but were told the ships might not be available for a year or more. Protests were conducted in front of the U.S. Embassy in June 1945. Then upon hearing that former First Lady Eleanor Roosevelt was in London that November, a group of brides gathered outside her hotel carrying placards that read “We Demand Ships” and “We Want Our Dad.”

The pressure worked, and by January, the first shipment in Operation War Bride was on its way across the Atlantic. The ladies were met with excitement by the press and suspicion by some American women who declared them nothing more than gold-diggers. Many of the brides formed social clubs that served as emotional support as they adjusted to their new homes.
__________________

Pre-order link: https://amzn.to/3U6yBMX
Posted by Linda Matchett at 1:30 AM